During your 3-hour Cold War Prague tour, our knowledgeable local historian helps you to grasp the daily struggles of Czechs under four decades of totalitarianism. Along the way, you visit sites that reveal the tensions of the Cold War, beginning with a sinister pedestrian tunnel lined with nuclear bunkers. Exploring the Vitkov Hill Monument, which showcased the mummified body of the first communist president, you’ll experience the heavy-handed communist-era propaganda forced upon an entire population. Enjoying panoramic views of Prague, we take in the futuristic 1980s Zizkov Tower, once believed to jam Radio Free Europe. Descending to the city center and Wenceslas Square, we trace the events of the Warsaw Pact Invasion that sent tanks into Prague in 1968 and the Velvet Revolution of 1989 when hundreds of thousands of Czechs brought down the Iron Curtain.

Explore the mausoleum that showcased the mummified body of Klement Gottwald.

Delve into communist-era propaganda techniques in statues and frescos.

Experience totalitarian architecture as we take in the brutalist National Assembly building built for the Communist Parliament.

Follow in the footsteps of the Warsaw Pact Invasion and the Velvet Revolution and learn about major dissidents, including Vaclav Havel, playwright and post-Cold War president.

Emerge with a better understanding of Cold War Prague and today’s Czech Republic, a liberal democracy still recovering from the social and economic effects of totalitarianism.

1 April to 31 October: St Vitkov Hill Memorial is closed on Mondays and Tuesdays

On these days, we can offer you a Cold War walk that does not include a visit to the St Vitkov Hill Memorial

For those with difficulty climbing, we recommend a private tour that leaves out Vitkov Hill. We can offer you an excellent tour of cold war sites in the city center that doesn’t require the ascent to Vitkov. When ordering the walk, specify in the “comment” section that you prefer to leave out climbing or email us at info@insightcities.com.

Our walks operate in rain or shine, though, in the case of inclement weather, our guides often make alterations for our guests’ comfort.

Entrance to the Vitkov Hill Monument:

If you’re in Prague on the first Wednesday of the month, listen up at noon. As the air-raid sirens are tested, you’ll hear an eerie reminder of the city’s 40 years of suffering and struggle behind the Iron Curtain. There are still nearly 800 pressurized bunkers located across Prague that can accommodate 40% of the city’s population. Built primarily during the 1950s, the bunkers were a response to the shocks of WWII as well as the omnipresent threats of the Cold War. One of the larger shelters is tunneled into Vitkov Hill, where you begin your 3-hour walk focused on Prague’s decades as the capital of a Soviet satellite state. 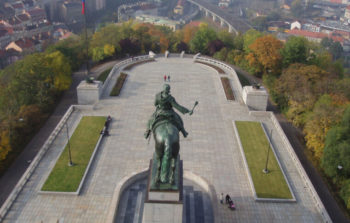 As you explore the decorations and statuary of The Hall of the Red Army, created on the site after the communists took power in the “elegant coup” of 1948, we discuss the heavy-handed propaganda strategies of the Communist Party of Czechoslovakia (KSC). You visit the mausoleum that displayed the mummified corpse of Klement Gottwald, the first chairman of the KSC, along with the adjoining laboratory and temperature control center, where a team of doctors, cosmetologists, and technicians cared for the embalmed body.

Vitkov Hill was already home to the largest equestrian statue in the world, a monument to the undefeated 15th-century Hussite general Jan Žižka, which was erected to honor the WWI Legionnaires who fought for an independent Czechoslovakia. To gain legitimacy, the KSC persistently used this tactic of linking their icons to Czech nationalism. Standing atop the Vitkov Memorial, you’ll take in an airy panorama of the city and the Žižkov Television Tower, an example of high-tech architecture that looms above the rest of the city’s skyline. When construction began in 1985, rumors circulated that it was designed to jam Radio Free Europe. 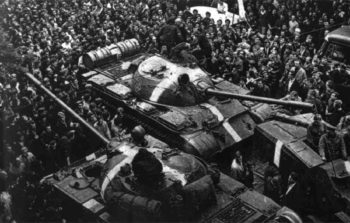 Returning to the city center, you visit key sites that focus our discussion on the life of Prague residents under totalitarianism. Perhaps the most symbolic structure of the totalitarian regime is the National Assembly building erected in 1972 as the seat of the communist government. A unique example of the “Socialist Brutalist” architectural style, the building was constructed as a titanic arch over the former Prague Stock Exchange, visually representing the triumph of socialism over the First Republic’s market economy.

From here you visit Wenceslas Square, the point of convergence for the Warsaw Pact tanks that crushed the Prague Spring of 1968, ending the 8-month period when freedom of speech and of the press blossomed. By the end of the tour, you’ll have a broad picture of the rise of communism in Czechoslovakia and of the consequences and key events of the Velvet Revolution, which ended the long Cold War era and swept Vaclav Havel, a dissident playwright and a prisoner of conscience, to the presidency of today’s liberal democracy, which is still recovering from the social and economic effects of totalitarianism.

This tour was fantastic. Vadim was an amazing guide and I would recommend this to anyone who wants a sophisticated, intellectual discussion on this history of communism in the Czech lands.

No one is better qualified than Vadim, with his personal lived experience of Russian, American, and Czech cultures, to tell these stories of Soviet occupation and the Czech struggles for independence. Vadim informs, entertains, and charms. Ask questions! Vadim can answer them. These are important historical sites, but I’m sure few people get the level of insight I got on this tour.

The tour was very educational our tour guide Vadim was awesome. I have read a lot about how communism affected eastern block countries and our guide Vadim has validated it. It was one of the best tours I had.