Led by a Jewish Studies Scholar

Explore some of the world’s best-preserved Jewish sites, including Europe’s oldest functioning synagogue and the Old Jewish Cemetery. In the company of a Jewish Studies Scholar, you’ll discover why prominent cities like Prague segregated their Jewish minorities behind ghetto walls for hundreds of years while relying on them for financial services barred to Christians. Throughout this Jewish Prague tour, you’ll enjoy stories of the unique culture and essential contributions of Czech Jews, even while you take in the enduring persecution and antisemitism they faced, tragically culminating in genocide and the Holocaust in the 20th century. As we conclude, we’ll ponder the fragile revitalization of Prague’s Jewish community today.

Enjoy the ancient atmosphere and fascinating details of the Old-New Synagogue, the oldest functioning synagogue in Europe, while learning of Ghetto life during the Middle Ages.

Exploring Prague’s Baroque synagogues, learn about Austrian Empress Maria Theresa’s expulsion of the Jews and the gradual emancipation of the ghetto under her son, Josef II.

Ponder the political, economic and ethnic tensions that led to modern genocide while visiting the Pinkas Synagogue’s memorial to the victims of the Nazi’s “Final Solution.”

Reflect on the communist suppression of Jewish life as well as on the present-day revival of Prague’s Jewish community.

Private tours: Sunday to Friday (not Saturday) 10 AM and 2 PM

Note: we block our booking calendar during Jewish Holidays when the Synagogues are closed for worship

This tour includes walking up and down stairs that can be narrow and steep. If you have mobility issues, please consider booking a private tour so that your guide can tailor the route to your limits and personal rhythm.

In the 20th century, the Czech Jewish communities of Bohemia and Moravia contributed some of the leading figures of modern European culture: Gustav Mahler, Franz Kafka, and Sigmund Freud among many others. But this assimilation was preceded by a thousand years of segregation and even violent persecution at the hands of the region’s Czech and German populations. The earliest records of a Jewish presence in Prague date from the 10th century. By the 11th century, Christian Crusaders bound for the Holy Land carried out the first of several devastating pogroms suffered by the Jewish community. 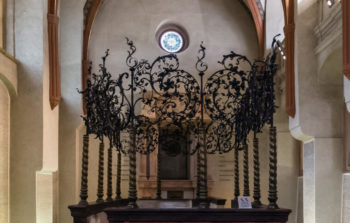 By the 13th century, Jews were forced to live within a walled ghetto, where they remained for 600 years, until 1848. Yet, within those walls, a rich culture and community life developed. Important rights of self-administration were granted to the ghetto from its beginnings because the city depended on its Jewish minority for financial services, which medieval religious doctrine barred Christians from performing. In many respects, Jews thrived in Prague, making up a quarter of the city’s inhabitants and, by the 17th century, emerging as the largest Ashkenazi community in the world.

Your 3-hour walking tour of the Jewish Quarter accompanied by a Jewish Studies scholar focuses on the collection of buildings, exhibitions and sites that make up the Jewish Museum: the five remaining synagogues, the Old Jewish Cemetery, and Jewish Town Hall. We begin at the Old-New Synagogue, the oldest functioning synagogue in Europe. Built around 1270, it is also among the oldest Gothic structures in Prague. Prohibited from practicing masonry, the Jews hired Christians to build the synagogue. At the heart of Jewish culture and learning in Prague for more than 700 years, this synagogue serves as the backdrop for our discussion of Jewish religious and social customs during the medieval period. 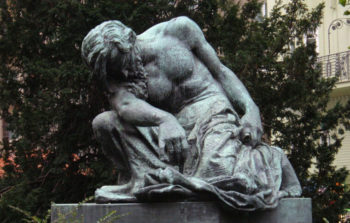 Visiting the Renaissance-era Town Hall built by Mordechai Maisel enables you to envision the golden age of Prague’s Jewish community. Maisel, the mayor of the Jewish Quarter who became Rudolf II’s Minister of Finance, used his fortune to pave the ghetto’s streets, support Jewish organizations and provide charity for the needy. At the same time, Rabbi Judah Loew ben Bezalel (1525-1609) was becoming legendary in Europe for his prolific theological and philosophical writings. Rabbi Loew is celebrated in Prague folklore as the creator of the Golem, a monstrous living being made from clay from the banks of the Vltava River. According to one version of the story, the Golem was created to defend the Jews from antisemitic attacks.

As you continue to move through one of the largest collections of Judaica in the world, the paradoxes of the Jewish experience in Prague become manifest. In 1745, the entire Jewish population was expelled by Austrian Empress Maria Theresa. Yet, only a few years later, facing a financial recession, Prague’s residents demanded their return. In 1782, Maria Theresa’s son, Josef II, issued the Edict of Toleration, granting the Jews religious freedom, eliminating professional restrictions, and allowing Jewish children to attend schools and universities. A grateful community renamed the ghetto district “Josefov,” as it is still known today. 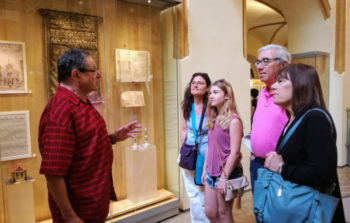 The increasing liberalism and toleration set in motion by Josef II were swamped by the genocidal nationalism of Nazi Germany. Prague’s Jewish community, at the height of its assimilation, was decimated by the Holocaust. We’ll consider the political, economic and ethnic tensions that led to Hitler’s invasion of Czechoslovakia and discuss the implementation of the Nazi’s “Final Solution” in Prague. We’ll also discuss the Jewish experience during the communist years and look at the fragile revival of Prague’s Jewish community taking place today.

Marlina was a fantastic tour guide. She was like a walking encyclopedia. I learned SO MUCH! My wife and I cannot say enough good stuff about Marlina. The tour itself is rich in fascinating Jewish history. I recommend this tour, especially if it possible to have Marlina as your guide.

We had a Stories of Jewish Prague tour in with Martina a year ago this past May. We really enjoyed our tour. We marveled at the depth of her understanding and thoroughness as she informed us of the historical significance and context each stop along the way. She was absolutely flawless and personable as an extra bonus.

Very highly recommended. We spent a wonderful morning with Vadim and were impressed with his deep knowledge and enthusiasm. He blends high-profile, well known sights with those that are more off-beat, with the end result that we came away with a much rounder appreciation of Prague and its history. We will certainly use Vadim’s company whenever we can, whether in the Czech Republic or elsewhere in the region.