Masterworks of Medieval Architecture and the Unique Bone Chapel at Sedlec

Just one hour’s drive from Prague, this Kutna Hora day tour acquaints you with a charming medieval town inscribed in the UNESCO World Heritage Fund, full of picturesque monuments and sites that take you back to another age. From the 1300s, the mines in Kutná Hora contributed an entire third of the European production of silver, spurring the economic dominance of the Bohemian Kingdom. The silver “Prague groschen” was a hard currency throughout Central Europe for several centuries. Naturally, the wealth of Kutná Hora prompted the town to express its importance by commissioning soaring medieval cathedrals, elegant town squares, and townhouses that we can still enjoy today. With your historian guide, you will also visit nearby Sedlec, to experience the uncanny and fantastic Baroque Bone Chapel or Ossuary decorated with the skeletons of 60,000 victims of the plagues and Hussite Wars.

Delve into Bohemia of the middle ages, when sovereigns of the 13th and 14th centuries were among the most powerful rulers in Europe.

Visit the atmospheric Bone Chapel at Sedlec, while your historian guide helps you ponder the Baroque-era philosophies of resurrection and redemption that prompted the use of thousands of human bones as an ornate church decoration.

Take in the beautiful Cathedral of the Assumption of Our Lady before encountering the stupendous vaulting of St. Barbara Cathedral, a masterwork of medieval construction.

Enjoy a traditional Czech lunch at an excellent local restaurant.

Pick-up from your central hotel or flat

Groups of over 7 should contact us at info@insightcities.com in order to get a special rate for their party since we’ll hire a larger bus for your party and your guide.

Your historian guide, your driver, and vehicle (a Mercedes Sedan, Van or Sprinter depending on the number of members of your group)

Combined ticket for the Ossuary, the Cathedral of the Assumption of Our Lady and the Church of St. Barbara. Your guide will help you to purchase your tickets on arrival:

Lunch is self-paid. Your guide will help you to select great choices from a traditional Czech menu at an excellent but casual local Kutna Hora restaurant.

Kutná Hora (a one-hour drive from Prague) is a charming medieval town inscribed in the UNESCO World Heritage Fund, full of quaint and ancient sites that also played a crucial role in the European monetary system. Since the Middle Ages, the silver “Prague groschen” was the hard currency of Central Europe for several centuries. The American dollar itself is named for its ancestor in the Bohemian lands, the Renaissance silver mines in Joachimstal. The name Joachimstaler was simplified to “Taler” throughout the Habsburg Empire and imported to the new world as the “dollar!” 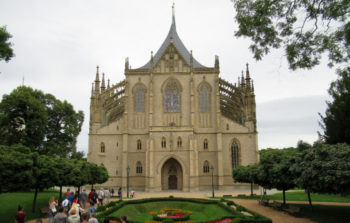 The mines in Kutná Hora contributed an entire third of the European production of silver since the 1300s, spurring the economic dominance of the Bohemian Kingdom in the Middle Ages. They called Kutná Hora the coiners of the cradle of banking, Florence. Quite naturally, the city became extremely self-confident. In order to express their outstanding position at a time when Prague’s relative power was in decline, the citizens hired a royal architect, Peter Parler, to create a cathedral to rival the St. Vitus Cathedral he constructed at Prague Castle. The result is St. Barbara’s Cathedral, a magnificent 15th-century structure with vaulting that is considered a masterwork of Europe’s middle ages.

The Cathedral of the Assumption of Our Lady at Sedlec, a part of the former Cistercian monastery, is equally worth the attention of any architecture lover in addition to the historical city center. It is the biggest and the most challenging cathedral in the Bohemian lands from the late 1200s showing the might of the politically active abbots (the heads of monasteries). The cathedral was reconstructed around 1700 by the famous architect Santini in the fashion of Baroque-Gothic, in which he married these two seemingly irreconcilable styles. 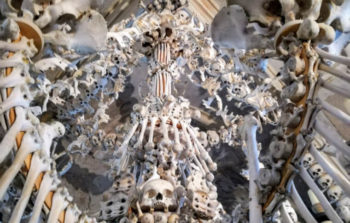 An ossuary or Bone Chapel, an uncanny and unique church made of human bones, is our most fascinating site on this Kutna Hora day tour. The monument was decorated by a 19th-century sculptor with bones of 50-70,000 victims of a 14th-century plague and of the Hussite Wars on the command of the Schwarzenberg family in 1870. yYour historian guide helps you ponder the Baroque-era philosophies of resurrection and redemption that prompted the use of thousands of human bones as ornate church decoration.

Depending on your interests, the narrow corridors of former silver mines winding deep under the ground can be explored as well, for an additional charge and extended day. Equally, we can arrange a visit to Cesky Sternberk Castle looming on a rocky mountain above the romantic Sazava river on our way back from Kutna Hora to Prague. Its rooms are furnished in the original fashion to give you an insight into the daily life of the influential aristocratic family who still owns the castle today. The Castle regularly attracts filmmakers so you may have already encountered it in the impressive number of movies in its portfolio. Last but not least, the Church of Saint James in the nearby village of Jakub hides a treasure trove of the greatest collection of Romanesque sculptures from the 1100s in Bohemia. Email us(opens in a new tab) if you are interested in booking an extended day and an additional stop.

Vadim accompanied the four of us on this trip to Kutna Hora. Picked up on time, travelled in a very comfortable Mercedes Van for the 1 1/4 hour trip from Prague to Kutna Hora. Vadim local knowledge and insight to the local area was invaluable. He explained the wars and the reasons behind them in plain English that put the pieces of history that I knew together in one concise package. Topped this off with a wonderful lunch in the famous Dacicky Beer Garden and then we moved on to the Bone Church. Interesting program and exciting trip I recommend this trip to one and all.

It was like getting a taste of a fascinating college course – which makes sense because he and his wife Bonita (co-founder) are scholars. If I’m making this sound intimidating, it’s not – just a deeper understanding than what you would read in a guidebook or hear on a bus tour. InsightCities small group tours aren’t generally for one person, but they are so small that it’s like walking around with a knowledgeable and interesting friend. You will never want to take a typical tour again. I look forward to taking their tours in other cities, with other scholars.