A Visit to Four Gardens

Visitors to Prague almost never encounter the hidden gem of the walled-in Vrtba garden even though it provides a luminous glimpse into the life of nobility in the 18th century and the aesthetics of Baroque landscaping. When you climb to the top courtyard with its marine grotto, you are also rewarded by beautiful vistas of Prague’s cityscape and the Castle. Next, this Prague Gardens tour takes you to the Wallenstein Garden, with its albino peacocks, mannerist statues, mythical fountains and tragic family histories spanning over 400 years. We conclude with a thoughtful look at the storied Castle Gardens, the first garden to import the Italian Renaissance concepts of topiary and parterre garden beds north of the Alps because Emperor Ferdinand I fell in love with the style and wished to make a paradise as a love gift to his Empress. The last flourish is a rare trip through the latticework of quiet and precious baroque terraced gardens that lead down the hill from the Castle and which are also frequently missed by travelers.

Discover the aesthetics of Renaissance and Baroque garden design and learn the surprising religious and political symbolism that flower beds and classical statues conveyed in their eras.

Explore the breathtaking Wallenstein Garden with its grotto wall, mythical fountains and gigantic aviary, while learning the bloody history of the Thirty Years’ War in Prague.

Grasp the lifestyle of 18th-century nobility in the walled Vrtba Garden.

Explore the Renaissance-era palaces of the Royal Garden and the Singing Fountain cast in bell bronze.

Small groups: Metrocafe, Klárov 1, 118 00 Praha 1-Malá Strana. Look for the café connected to the entrance of the Malostranska Metro.

Available daily from April to October

Travelers with mobility issues: This tour typically includes walking up and down stairs that are sometimes very narrow and/or steep. If you believe you will have difficulties, please consider booking a private tour so that your guide can tailor the route to your limits and personal rhythm, leaving out some sites and focusing on other sites as needed.

Throughout history, gardens have mirrored the social, political and religious outlook of the times. While this tour focuses on gardens of the Renaissance and the Baroque periods, there are also horticultural gems scattered around the city dating from Medieval to modern times, from cloistered gardens to sprawling picturesque wonders. Earlier Medieval gardens were primarily for cultivating herbs for medicinal or culinary use and have only been preserved in certain Gothic cloisters. Vineyards on the hills around Prague also date back to before Charles IV. But the idea of a large palace garden only emerged in the 1500s with Emperor Ferdinand I, who was particularly keen on the lush Mediterranean gardens inspired by the Italian Renaissance. Ferdinand’s fascinated reaction was to bring classicism north of the Alps, importing a formidable team of Italian gardeners and architects to the capital of Bohemia. 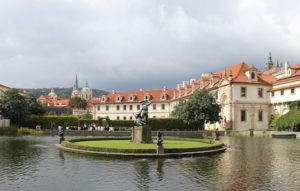 Highlights of the Royal Garden include the Belvedere Summer Palace commissioned by Ferdinand I as a present to his wife Queen Anne, although she did not live to see its completion. Designed by the Italian Paola Della Stella, it is often described as the most beautiful Renaissance structure outside of Italy. In front of this pleasure palace is the Singing Fountain cast in 1564 in bell bronze so that the dropping of water into the bowl causes it to resonate or “sing.”

Our Prague Gardens tour moves past the Fig House and the Orangery, where figs, almonds, oranges, and lemons were grown for the first time in Central Europe. Towards the western end, we consider how tulips, a hitherto unknown flower in Europe, were introduced to the Royal Gardens as an exotic gift by the Turkish Sultan of Constantinople. The bulbs were later exported throughout Europe, including the Netherlands where they reached extraordinary popularity ultimately causing the Tulipomania crash, the tulip bulb speculative bubble of the 1630s! 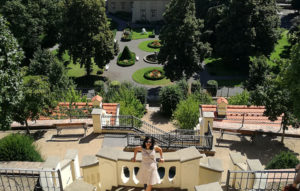 We admire the stag moat, before crossing through the castle courtyards and descending the Bull Stairs to the South Gardens, we will walk down the hill through a collection of lovely terraced gardens below the castle. At the bottom of the hill is the breathtaking and grand Wallenstein Garden, with its albino peacocks, mannerist statues, grotto wall, and mythical fountains. Here, we learn not only of the transition from Renaissance classicism to Baroque philosophies but also of the dramatic life of the garden’s commissioner, Albrecht von Wallenstein, who rose meteorically to prominence as the Supreme Commander of the armies of the Hapsburg Empire, only to be assassinated by his wary emperor for the political power he amassed from his victories in the Thirty Years’ War. 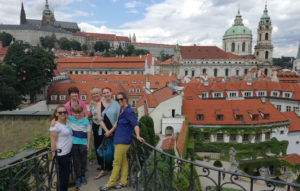 Another highlight of our Prague Garden tour is our visit to the Vrtba Garden, a hidden gem of a Baroque walled garden from 172. This is a sight rarely seen by visitors to Prague even though it provides a luminous glimpse into the life of nobility in the 18th century and the aesthetics of Baroque landscaping. When you climb to the very top courtyard with its marine-themed grotto, you are also rewarded by beautiful vistas of Prague’s cityscape.

I don’t usually leave reviews on Trip Advisor, although I travel plenty for pleasure and work. But Vadim was so wonderful and this tour was so educational, and so much better than anything I’ve ever experienced, that I have to say a little thank you.

This was a wonderful tour for my 85 year old mum and myself, Bonita met us in the hotel and we took the tram to the gardens. She is so knowledgeable and experienced in Prague, the history and insight she gave us was amazing! I would highly recommend for garden and history lovers!

A Visit to Four Gardens