Enjoy a tasting tour of superb monastic-brewed lagers and ales along with delicious traditional Czech beer snacks at two of the oldest monasteries in Bohemia, the fountainhead of much of the world’s beer. Throughout this Prague beer tour, you also take in stunning examples of Czech Baroque architecture, including an intimate private journey behind-the-ropes into the breathtaking Baroque Strahov Monastery Library, which most travelers see only from the door. Your historian guide will help you to appreciate the 1000-year history of Czech beer brewing from monastic origins through modern-day microbreweries as you explore some of Prague’s most unforgettable Baroque environments and discover their histories.

Savor a “flight of beers” that includes nine small samples of different traditional brews in the oldest monastery in Bohemia, Břevnov, a prime example of Czech Baroque architecture.

Enjoy an exclusive private journey behind-the-ropes at the glorious Baroque Strahov Monastery Library (you may recognize it from a number of contemporary films).

Discover the history of the monastic breweries, their famous beers and traditional beer snacks from your guide, a local historian and beer lover.

Take in fabulous views over Prague from Strahov Monastery as well as the delightful grounds and grand Baroque church at Břevnov Monastery.

Small groups: meet right at the door of Metrocafe, Klárov 1, 118 00 Praha 1-Malá Strana. Look for the café connected to the entrance of the Malostranska Metro.

Teens are welcome to enjoy the tour with their families and can order snacks and non-alcoholic drinks. Alcoholic beverages can only be served to those 18 and older.

“Bohemia is…the fountainhead…of most beer in the world,” says Garret Oliver, an award-winning brewmaster of the Brooklyn Brewery and the leading beer critic in America. “Czech beer is phenomenal,” and “Czech beer standards are the best in the world. There’s simply nothing to compare, in terms of lagers,” says The New York Times food and drink writer, Evan Rail. Czech lager is at its best when tasted fresh, and it doesn’t come any fresher than when it’s drawn from where it’s brewed. A few of Prague’s newly reopened microbreweries, set in 18th-century ambiance, are resurrecting the thousand-year-old tradition of brewing in Bohemia. 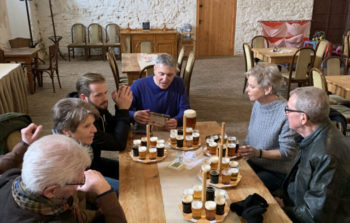 This Prague beer tour is designed for those who are interested in beer and don’t mind the Baroque as well as those who are interested in Baroque and don’t mind a beer. You will visit two of the oldest breweries in Prague at Břevnovský Klášterní Pivovar, a Monastery Brewery of the Black Monks, the oldest monastery in Bohemia, founded in 993. The monastery’s church of St. Margaret (built 1708-1735) is one of the best architectural examples of the Czech Baroque. In the cellar of the church is a Roman crypt from 1040, one of the most valuable Romanesque structures in the Czech lands. Beer was made here for 900 years until the brewery closed by the end of the 19th century. But the tradition was reclaimed when a new brewery opened in mid-2012.

Come along, taste their beers, see and learn how they are made, and maybe even talk to the people who make it, all in the restored Baroque spaces of the old stables. The program includes flights of beer with nine small samples along with beer snacks at the brewery pub of Břevnov Monastery. Even the Prior of the Břevnov Monastery says, “Beer is a good thing. It brings people together, and always in goodwill.” 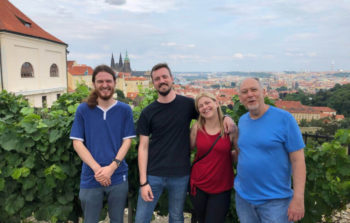 Also on the itinerary is Strahov Monastery of The Royal Canonry of Premonstratensians, one of the oldest of this Order in the world. Founded in 1143, its first beer brewing comes from the early 14th century. Today’s brewery and restaurant sit on the spot where the “new” brewery was built in 1628 and operated until 1907. Just beyond the walls of Strahov, located on the hill over the Prague Castle, are breathtaking views of the city － much more picturesque after a glass of the St. Norbert’s microbrew, named for the order’s patron saint. Our tour highlight is our 40-minute private journey behind-the-ropes at the glorious Baroque Strahov Library with an antique book collection numbering approximately 200,000 volumes. Most people experience this astonishing space from the door or in the many films which have featured it. 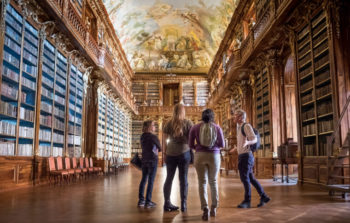 For those who are interested in a different environment for experiencing Czech beer and its history, please e-mail us at info@insightcities.com(opens in a new tab). We can also offer brew tours that take you through traditional Czech pubs (hospody) or through Prague’s modern-day microbreweries. We can arrange guided beer tastings appropriate for small groups to large company events.

Excellent guiding by Vadim, professional yet personal and we had time for a few beers, as well as some anecdotes. Would highly recommend this tour.

It was a rainy day so we had to adjust a little. Beer was good, and Vad’s knowledge was over the top. Ended up spending 5 hours with him learning about Czech history

Very interesting, very informative and a lot of fun! Vadim our guide made it a trip to remember! Definitely an experience to recommend!

Vadim gave my husband and I a true learning experience. He shared an incredible amount of knowledge with us, answering all of our questions and giving us background. He is a worldly, fun, good sense of humor. We were able to enter the gorgeous library where all the other people had to stay behind the small door. Vadim shared so many interesting details of the library, the books, the hidden doors, the furniture. Breathtaking! A MUST! We got to try some of the delicious beer from both breweries while learning more about Vadim, the culture, the city. I would HIGHLY recommend this tour with Vadim!