Take a bite out of Czech culture and history on this food tour of Prague. Your native guide (a passionate foodie and local historian) will take you on a culinary excursion showing you what to eat in Prague while revealing the cultural context behind every flavor, as well as sharing personal memories and anecdotes that surround different Czech dishes. Get a tasty and in-depth view of what it means to eat, drink and cook Czech, from family-table traditions to the newest innovations on the local culinary scene.

Try the time-honored chlebicky, or open-faced sandwiches, which have long held a special place in the heart of Czechs.

*your guide all to yourself

As this is a culinary walking tour, please contact us if you have any dietary requirements, mobility issues, or questions.

Prague has long held a reputation for its hearty cooking washed down with Pilsner lager. The Czech capital is now home to some exciting new takes on the culinary classics led by a new generation of adventurous chefs that have put Prague firmly on the gastronomical map. However, there’s still plenty of grandma’s duck and dumplings to be had – and no shortage of traditional pubs pouring those golden pints. This is nothing but good news for hungry visitors looking for a taste of the latest – and greatest – that Prague has on offer. And our food tours are all led by experienced, native guides who can give you an in-depth and personal view of what it means to eat and cook Czech, from family-table traditions to the cultural and historical significance of certain dishes, and the newest innovations on the local culinary scene. 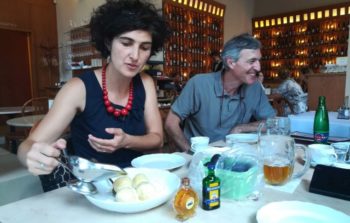 Join us with an open mind and an appetite as we make our way through Prague’s city center, with stops in Old Town and New Town. We’ll start at a bustling, quintessential Czech deli, home to the humble and honored chlebicky, or open-faced sandwiches, which have long held a special place in the heart of Czechs. As we sample several varieties paired with a glass of the Communists’ answer to Coke, we’ll talk about the role such delis have played over the decades in bringing people together from all walks of life, as well as the unexpected ways this simple sandwich has made its mark on history.

Next, we’ll head to one of Prague’s most storied traditional pubs, where we’ll drink freshly poured pints of Pilsner Urquell and try a range of classic beer snacks such as pickled cheese (nakladany hermelin), pickled sausage (utopenec), and head cheese (tlacenka). We’ll take a look at how these delicacies are lovingly made and how they have become a staple in Czech pub culture, while our local guide will share what it’s like to live in – and drink in – the nation that consumes the most beer in the world. 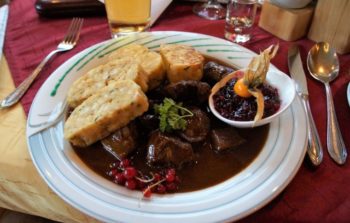 The classics are a must, and not just for tourists: Sunday family lunches figure prominently in Czech life, with the hearty dishes of one’s childhood forming a backbone of tradition later in life. We’ll visit a modern take on the communist-era canteen and taste the aged appeal of the likes of slowly braised beef, succulent sauces and, of course, the Czech Republic’s famous dumplings (did you know that there are four types served in Czech cuisine, and a fifth that’s a dessert?), along with herbed potato soup and some new twists on traditional recipes.

Czechs always make room for sweets, and it’s no surprise to see people savoring towering, cream-filled cakes–even first thing in the morning. Our next stop will feature some of the most delightful local concoctions, from meringues to rum-soaked sponges and gravity-defying layered pastries, and we’ll learn about the influence of the Austro-Hungarian Empire on the confectionary history of the Czech lands and the sweet associations that many of these desserts hold. 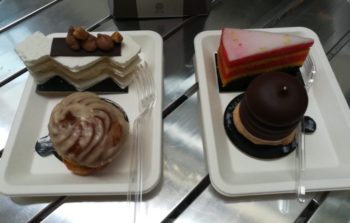 Not to be outshone by the country’s famous beer, Czech and Moravian wines have been making quite a name for themselves in recent years. We’ll sample some of their best varietals, including a white Pinot Grigio (rulandske sede), paired perfectly with a local take on tapas. You can also try another favorite, a shot of homemade cherry or plum brandy: a rite of passage for all visitors.

All throughout the tour, our local guides will share both their expertise in Czech cuisine and their memories, impressions, and anecdotes. These experiences come from a lifetime of eating, cooking, craving, and talking about the dishes that have shaped this country and its people into what they are today.

Insight Cities is head and shoulders above many other European tours I’ve been on. The guides are professors and subject matter experts in the field, and their expertise and ability to captivate a crowd really comes across. I took the tour with my mother and we both enjoyed it immensely. Going on this tour made our trip to Prague extra special. If you are visiting Prague, don’t miss it!