This 3-hour alternative Budapest tour of “Ruin Bars” and “Kerts” (gardens) helps you encounter the once-abandoned spaces that have been revitalized into bars, cafés, clubs, street markets and art hubs in the post-Cold War cityscape. The transition from communism to capitalism left vacant lots and crumbling buildings in Hungary’s capital that have been rescued and repurposed by artists, community leaders, hipsters, and local entrepreneurs. Our urban historian guide will let you in on the backstory of every eclectic, cool space that you enjoy on this tour of Budapest’s Ruin Bar scene in the 7th and 8th Districts. You can choose between a relaxing 3-hour afternoon tour (from 2 PM until 5 PM) full of cafes and market stops or an evening tour (from 6 PM until 9 PM) where we enjoy a range of wines and cocktails as the venues get busier and more energetic around us.

Begin at the 1901 Gozsdu Udvar with its 200-meter-long courtyard cutting across two main streets in the Jewish District that connects seven buildings and six courtyards, today filled with eclectic shops, bars and eccentric cafes.

Check out Manó Klub or Kolor, delving deep into alternative Budapest with its striking street art and Sunday open-air market at Gouba: stocked with the local design items that the neighborhood has become known for.

Pass along Kazinczy utca, the street that has become Budapest’s nightlife hub. Among the restaurants, bars, and hostels, we’ll stop at the legendary Szimpla, the first Ruin Bar, which opened in 2000 and fueled the trend.

Discover more street art on Akácfa utca while dropping by Fogasház, a Ruin Bar that hosts a pulsing techno club on its first floor, among other venues.

Crossing into the 8th District, a poorer neighborhood that is home to the Roma community, we visit two flamboyant community spaces, Auróra and Müszi, the latter once a decrepit communist-era department store.

From spring to fall, we can enjoy the panoramic views and refreshment from the terrace of neighboring Corvintető.

Over 18s only on small group tours

Additional costs: Beverages, cuisine, and design items are purchased independently. However, your guide is there to help you identify authentic local drinks, dishes, and snacks and original design items by Budapest’s trendsetting artisans.

Since the fall of communism and the transition to capitalism, Budapest has become a beacon for alternative spaces that have developed in the abandoned interstices of the city center, giving way to a vibrant nightlife of parties set in unusual places such as “Ruin Bars,” in “kerts” (gardens), and a series of community hubs and street markets. This tour with an urban historian takes you around the 7th District (the former Jewish district), as well as through a few edges of the 8th District where most of Budapest’s alternative spots are found. It can be a relaxing 3-hour daytime tour (from 2 PM until 5 PM) full of bars, cafes, and market stops or an evening tour (from 6 PM until 9 PM) where we enjoy a range of wines and cocktails as the venues get busier and more energetic around us.

We love beginning at Gozsdu Udvar, a remarkable, 200-meter-long courtyard that cuts across two main streets of the old Jewish district, connecting seven buildings and six courtyards. Built in 1901, it was named after Manó Gozsdu, the Romanian-Hungarian philanthropist who constructed it and also provided student scholarships to support the Romanian minority in Hungary. Though the complex was left to rot during the Communist era, the whole courtyard was renovated just a few years ago and today it is filled with eclectic restaurants, bars, cafés, and clubs. On Sunday, from spring to fall, there is Gouba, an open-air market perfect for scoring some of the small local design items for which Budapest has become a trendsetter in recent years. Poking our heads into Manó Klub or Kolor, we’ll continue to delve further into alternative Budapest, taking in the funky street art and the DIY ingenuity that infuses the neighborhood scene. 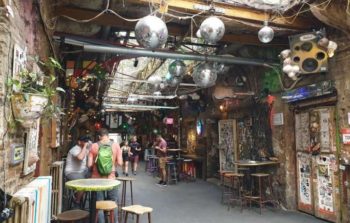 Kazinczy utca is probably the Budapest street when it comes to nightlife. You’ll find nothing else besides restaurants, bars, and hostels. Here we encounter the legendary Szimpla, the bar which most hipsters have heard of well before setting foot in the city. It was the very first of the “Ruin Bars,” fueling the trend since 2000 as Budapest’s beautiful but crumbling turn-of-the-century buildings struggled to find new ownership and purpose. Neighborhood entrepreneurs and activists breathed life into derelict buildings and spaces by making them collectives for a new era. Szimpla is huge, with loads of distinct spaces fulfilling different functions. They even host a lovely farmer’s market on Sundays!  Moving on to Akácfa Street gives us one of many chances to explore the district’s striking street art. We’ll also see what’s happening in Fogasház, another recent Ruin Bar and a big nightlife hit (if a bit more commercial) that hosts a renowned and pulsing techno club on its first floor.

Crossing into the 8th District confronts us with a poorer neighborhood: home to the Roma community on its inner streets; although developing yearly thanks to EU projects. Here, we need to visit Műszi on the last floor of a quite ugly, communist-era department store. Today, this vast space is abundantly and flamboyantly decorated in a DIY-fashion and serves as a community forum, which regularly organizes discussions, theatrical productions, and much more. Műszi’s neighbor, Corvintető, offers us refreshment and panoramic views from its terrace from spring to fall. 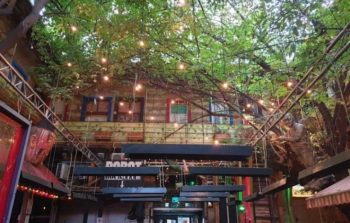 Just a few hundred meters away, deeper in the 8th District, we’ll peer at the charming, tucked-away synagogue of Teleki Square: one of the last Jewish prayer houses left in the neighborhood. Our final mission, however, must be Auróra. Like Műszi, Auróra serves as a flamboyant community space, built from scratch by locals with a philosophy of social inclusion at the core of its activities. The owners used to run another venue called Sirály – a young Jewish community center opened to everyone before the city authorities decided to close it. Aurora thus sums up the phenomenal and varied alternative scene we’ve encountered. It is both a venue for resilient community life that also hosts raucous parties during the weekends. 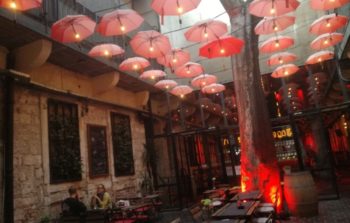 We did the Downtown Pest tour with Andras a few days ago. He is extremely articulate and knowledgeable. And very flexible–he will tailor the tour to your particular interests. This was a great introduction to Budapest, its history and politics. Andras even took us on the metro for part of the tour and taught us how to get a pass, etc. If you like scholarly, in-depth tours, then you will like Insight Cities tours. Highly recommend Andras and Insight Cities tours.

After engaging Insight Cities for unforgettable tours in Vienna and Prague, we ended our trip with 2 more from the company. After 5 tours, we can easily recommend this company. The guides are superb. Hope to see them in more cities in the future.