This 3-hour Jewish Budapest tour follows the varied history of a thriving Jewish community that made up nearly one-fourth of the Hungarian capital’s population before WWII. While exploring Budapest’s Jewish District, our Jewish Studies scholar guide will explain how from the 18th century, Budapest’s Jews played a profound role in the social and economic modernization of the city. As we consider the essential cultural contributions of Budapest’s Jewish citizens, we also reflect on their harrowing persecution, culminating in 20th-century genocide in the Holocaust. As we pass by kosher pastry shops and restaurants, we will ponder the ways the community and its culture are being revitalized today.

Begin at the square where the father of modern Zionism, Theodor Herzl, was born.

Explore the Dohány Street Synagogue, the largest temple in Europe, with the assistance of a Jewish Studies Scholar. Take in the lavish, Moorish Revival style before visiting the Temple of Heroes, the Jewish Museum, and a Memorial Park, all within the complex.

Walk to the neighboring Ghetto Wall Memorial, erected in 2014, before passing a luxurious Mikve (or Jewish ritual bath) and continuing to the Art Nouveau orthodox synagogue on Kazinczy Street.

Discover the history of the Status Quo Ante stream of Judaism while observing the Rumbach Street Synagogue.

We will conclude our tour reflecting at the Shoes on the Danube Bank memorial. This is a space to remember the Jewish lives lost here and to consider the revitalization of Budapest’s Jewish community today.

Budapest’s Jewish community flourished from the 18th century, making up nearly one-fourth of the city’s population by the Second World War. Jews also played a profound role in the economic and social modernization of the city and throughout Hungary. Our 3-hour Jewish Budapest tour focuses on the so-called Jewish District although we need to emphasize that Jews lived not only in this area of Downtown Pest but all over the city. The Jewish Quarter was home mainly to Budapest’s Jewish bourgeoisie and a center for Jewish religious and cultural life. Tragically, the district would also become the site of the desperate ghetto set up in November 1944. Although the Holocaust had an irreversible impact on Jewish life in Budapest, the quarter still houses several Jewish cultural institutions and schools, kosher pastry shops and restaurants, which we can explore.

Your tour starts at the square where Theodor Herzl, Austro-Hungarian journalist, playwright, political activist, and father of modern Zionism was born. The proverb: “No one is a prophet in his own land,” predicts quite accurately how the vast majority of Hungarian Jews would firmly reject Herzl’s Zionist ideas. Most Jews in Budapest belonged to a modernized (or “neológ” in Hungarian) stream of Judaism and considered themselves Hungarians of Jewish faith. This prosperous community hired Austrian architect Ludwig Förster to design a new, pompous synagogue in Dohány Street to showcase their sense of belonging. 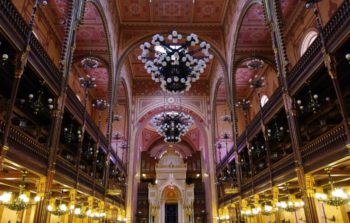 In the company of a Jewish Studies scholar, you’ll take in Dohány, the largest synagogue in Europe. Like many reform synagogues, the Dohány is distinguished by its Moorish Revival style. It was ceremonially opened in 1859, eight years before the emancipation of the Jews in Hungary. The building complex also houses the Temple of Heroes, built in honor of the Jewish soldiers who died in World War I, the Jewish Museum, and a Memorial Park commemorating the victims of the Holocaust.

After leaving the Memorial Park, we head to the neighboring ghetto wall memorial, erected in 2014. Then we’ll pass by the luxuriously renovated Mikve (a Jewish ritual bath) on our way to the art nouveau Orthodox synagogue in Kazinczy Street built in 1912-13. 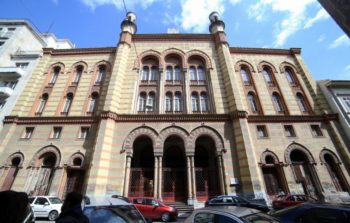 Our next stop is at the synagogue of the Status Quo Ante stream of Judaism in Rumbach Street. This unique stream of Judaism was established in 1868. In that year, a Jewish congress was convened to manage Jewish religious and educational affairs. However, Orthodox and Neologue delegates were unable to conclude an agreement, which led to the official schism of the two streams. Following the division, a third conservative stream was born, which aimed to restore the balance before the rupture (hence the name Status Quo Ante). While enjoying the splendid Moorish Revival style synagogue, we discover the historic personalities of its congregation.

The Shoes on the Danube Bank makes for a touching conclusion. A memorial of 60 pairs of shoes placed on the embankment helps us to remember the Jewish men, women, and children who were taken to the river in the thousands and murdered in the very last year of WWII by fascists in collaboration with the Nazis. We pay our respects to those who perished in the Holocaust by discussing the ideological forces that unleashed genocide across Europe and Hungary while considering the fledgling revitalization of the Jewish community in Hungary today. 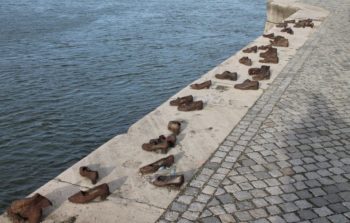 We took several walking tours, including one of Art Nouveau and one of Jewish Budapest. Both were led by guides of truly outstanding backgrounds, and both tours were marvelously interesting. We are history buffs, and both tours helped us to understand the complicated backgrounds of the areas we were walking through. The Are nouveau tour was gorgeous, of course, Budapest being the find=est city to display that art form. The Jewish tour was in-depth. All I can say is: Give yourself a major treat and take both of these tours.

Like so many travelers, we feel the best way to get to know a place and its people is through the eyes of a local guide. Insight Cities fills that objective with aplomb. We booked two tours with Insight Cities, the City History tour with Andras (in combination with Taste Hungary), and the Jewish tour with Eszter. Bonita, the founder of Insight Cities, combined the highlights of both tours so that the itineraries would be complimentary but not duplicative. Both guides were accomplished, pleasant, sensitive, and good-humored. We would recommend Insight Cities for Budapest as well as other destinations.

Buda Castle: a Kingdom of Many Nations