Budapest abounds in exquisite Art Nouveau structures and interiors, the radical design style that swept across turn-of-century Europe within architecture, applied arts, and fine art. Hungary developed its own cutting-edge take on the movement, known as Hungarian Secession, exemplified in its founding father, Ödön Lechner, featuring the use of porcelain along with Asian motifs and elements. This 3-hour Art Nouveau walking tour of Budapest scratches the surface of a city filled with beautiful examples of this cutting-edge aesthetic, highlighted by an expert art/architecture historian as your guide.

Discover the flamboyant Royal Postal Savings Bank, designed by Ödön Lechner, also known as the Gaudi of Hungary, and discuss the interior design elements of the entrance hall.

Admire the facades and interior designs of the glorious Gresham Palace, once an office space and series of luxury apartments, and today Budapest’s most luxurious hotel.

Visit a flower shop, which still has its original interiors, a department store, several bank offices, and an Art Nouveau museum and coffee house, where we explore the common motifs of Hungarian Secessionism.

Consider the use of tiles in facades that Hungarian Art Nouveau became famous for, as we pause at Thonet House, thanks to innovations by the famous Zsolnay porcelain and ceramics factory in Pécs, a town in the south of Hungary.

Examine the various Asian motifs and elements employed by designers, as a reference to the perceived eastern origins of Hungary, and also popular in Art Nouveau across Europe.

Except on Saturdays, we conclude at the fascinating orthodox Kazinczy Street Synagogue, decorated in Art Nouveau style.

Additional costs may be included if one or both of these sites are open on the day of your tour:

At the turn of the 20th century, roughly between 1880 and 1914, Art Nouveau was the fashionable and cutting-­edge aesthetic for architecture, applied arts, and fine art all over Europe. Hungary developed its own spin on the movement called “Hungarian Secession” (in Habsburg Austria, Art Nouveau was called Secession). This Budapest Art Nouveau tour will take you through the finest examples of this distinctive and elegant style, including buildings designed by the founding father of Hungarian Secession, Ödön Lechner, regarded as the Gaudi of Hungary. 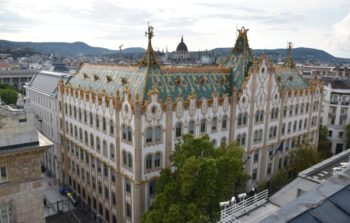 Art Nouveau became so popular in Budapest (and in many provincial towns in Hungary) that it is impossible to see all Art Nouveau buildings in one day. This introductory tour takes you along some of the Art Nouveau highlights in Downtown Pest. It includes stops at the two most undeniably important buildings of the movement: the Royal Postal Savings Bank, designed by Lechner (a very frivolous and Gaudi-­like design), and the Gresham Palace, built by the founder of the London Stock Exchange, Lord Gresham, as office space and a series of luxury apartments for Hungarian nobility (and today, the number one luxury hotel in Budapest). Fortunately, both buildings allow visitors into the entrance hall, allowing us to admire the wonderful details on the outside, as well as the stunning interior elements.

Other stops on this walk include a flower shop, which still has its original interior, a department store, several bank offices, and The House of Art Nouveau, which is a small but exquisite museum and coffee house – a wonderful private initiative. As we pause outside of Thonet House (designed by Lechner in 1890), you’ll also examine a series of ceramics from the renowned Zsolnay factory in Pécs, a town in the south of Hungary. The extensive use of such ceramics on the exterior of the buildings (the roof and the façade) as well as in the interior, is one of the most typical features of Hungarian Art Nouveau. These decorations were only made possible by Zsolnay, who made groundbreaking inventions renowned all over the Habsburg Empire: the roof of the St. Stephan’s Cathedral in Vienna is also made of Zsolnay tiles.

Another common Hungarian Art Nouveau feature is the use of Asian motifs and elements in decoration: a reference to the supposed eastern origins of the Hungarian nation. We will also discuss how Orientalism influenced Art Nouveau across Europe. Some elements of the tour are dependent on the day of the week, for example: on weekends we cannot enter the Hungarian National Bank, which has some very fine examples of Zsolnay porcelain; and the Kazinczy Street orthodox synagogue, with its exquisite Art Nouveau interior, is closed on Saturdays. On these days, we will adapt your tour to explore the best sites available.

We took several walking tours, including one of Art Nouveau and one of Jewish Budapest. Both were led by guides of truly outstanding backgrounds, and both tours were marvelously interesting. We are history buffs, and both tours helped us to understand the complicated backgrounds of the areas we were walking through. The Are nouveau tour was gorgeous, of course, Budapest being the find=est city to display that art form. The Jewish tour was in-depth. All I can say is: Give yourself a major treat and take both of these tours.

After engaging Insight Cities for unforgettable tours in Vienna and Prague, we ended our trip with 2 more from the company. We took the art nouveau tour with Runa. Runa nicely tailored the walk to fit our needs and interests. Runa’s perspectives and knowledge truly added value to our understanding of the city, the region, culture and politics surrounding art nouveau. The architecture was also fabulous! After 5 tours, we can easily recommend this company. The guides are superb. Hope to see them in more cities in the future.

Having true scholars organize and conduct such tours is a great concept which really added a special depth and created a uniquely special learning experience to these tours. Also, being private tours, our sights and discussions were not limited to just the actual tour objectives but we could digress into other subjects and sights that were of interests to us. I highly recommend Insight Cities tours and I believe they offer these unique tours in many cities besides Prague and Budapest.