Discover Germany’s Largest UNESCO Site: the Jewel in the Crown of Prussia

Discover why Potsdam is Germany’s largest UNESCO site. Known as the Jewel in the Crown of Prussia, this gem of a town was for centuries the summer destination for Berlin-Brandenburg electors, Prussian kings, and German emperors alike. In the company of your historian guide, this Potsdam tour helps you explore Baroque gardens, sparkling lakes, and lush woodlands alongside rococo palaces and the largest, exclusively Dutch Quarter outside of the Netherlands. Experience the town’s royal history from the 1700s as well as its use as a setting for the Potsdam Conference, where in 1945 Truman, Stalin, and Churchill fatefully divided Germany and set the Cold War in motion.

Discover Frederick the Great’s military successes and legendary patronage of the arts at the fabulous rococo Sanssouci Palace, which he built to rival Versailles.

Take in the historic city center with its collection of 18th-century Dutch buildings: the largest outside of the Netherlands, and sample Dutch delicacies before admiring Potsdam’s own Brandenburg Gate.

Extend your tour to include an interior tour of the Sanssouci or Cecilienhof palaces, offered as audio-only tours by the palaces.

Hire a bicycle and explore the city on two wheels while your guide tells stories of noblemen, emperors, immigrants, Nazis, and Soviets as they appeared throughout the town’s history.

3-hour tour of the Sanssouci grounds and the Dutch Quarter.

If you prefer an extended tour of 5 to 6.5 hours, which includes the interiors of Sanssouci and/or Cecilienhof Palace, contact us at info@insightcities.com for information and pricing.

For those who wish to visit the palace interiors at Sanssouci and/or Cecilienhof, plan your visit for Tuesday to Sunday.

Le Crobag Cafe in the Potsdam main train station, right across from the Tourist Information Center. (We’ll send you easy directions to take the S-Bahn from Berlin.)

If you prefer to arrange a vehicle and driver to pick-up from your Berlin address, contact us for information and pricing.

Groups of over 10 should contact us at info@insightcities.com in order to get a special rate for their party.

Potsdam is rightly known as the “Jewel in the Crown of Prussia.” For almost three centuries, the Hohenzollern dynasty of Berlin-Brandenburg electors, Prussian kings, and German emperors built lavish summer palaces amongst lush woodland, shimmering lakes, and impressively designed gardens. We’ll take you on a journey encompassing these glorious royal sights as we simultaneously discover traces of the city’s dark Third Reich and Cold War history. Though Potsdam was heavily bombed in 1945 – with more than 60% of its buildings reduced to rubble – the palaces and gardens almost entirely escaped damage. 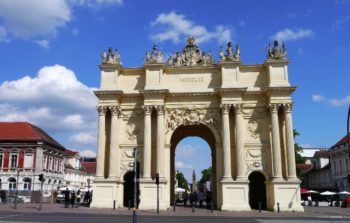 The most visited and famous site in Potsdam is Frederick the Great’s fabulous rococo Sanssouci Palace and gardens. We’ll discuss why the king became a legend during his lifetime and how he made Potsdam to Berlin what Versailles was to Paris.

The tour also takes us right into the historic city center, where we’ll find a handsome collection of 18th-century buildings known as the Dutch Quarter which was built for Dutch immigrants. It is the largest, exclusively Dutch housing built outside the Netherlands. We can sample some Dutch delicacies such as ‘Poffertjes’ while admiring the triumphal, Roman-style Brandenburg Gate – yes, there’s one in Potsdam too!

Our 3-hour tour does not enter Sanssouci Palace interiors. Sanssouci Palace offers visits to its interiors exclusively as audio-guided tours. Therefore, you will need to book your timed tickets in advance or email us and we can assist you with your booking. One option is to end your tour with our guide at the palace and you can continue with your audio-guided tour. Alternatively, you can extend your tour with us for a longer day with our guide that includes Sanssouci Palace and/or Cecilienhof Palace interiors. Contact us(opens in a new tab) or email us at info@insightcities.com(opens in a new tab) for pricing and details. 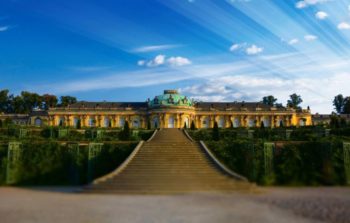 Depending on whether you choose to extend your tour by 2 to 3.5 more hours, we can also take you to Cecilienhof. This is the last royal palace that was built before Kaiser Wilhelm II, Germany’s last emperor, abdicated the throne at the end of the First World War, and also the venue of the ‘Potsdam Conference’ in the summer of 1945. It was here that Harry Truman, Joseph Stalin, and Winston Churchill met to decide upon the fate of Germany after the capitulation of Hitler’s Third Reich. You’ll find out how the subsequent division of Germany deeply affected this city and its people. In 1952, almost right in the center of Potsdam, the East German Stasi set up a notorious remand prison. 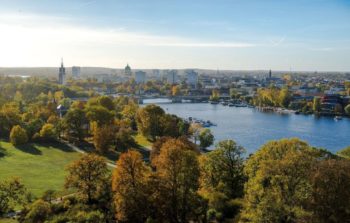 We’ll conclude the full-day (6.5-hour) experience walking across the Glienicke Bridge – better known as the ‘Bridge of Spies’. Here, in 1962, US pilot Gary Powers was exchanged for the Soviet spy Rudolf Abel. The center of the bridge marked the exact dividing line between East and West Germany.

Today, the city of Potsdam along with its surrounding palaces and gardens constitute the largest UNESCO World Heritage site in all of Germany. The tour will transport you back to the city’s weighty past while giving you a feel for the laid-back, live-for-the-moment place it has become today.

From Berlin Central Station (Berlin Hauptbahnhof), take the S-Bahn S7 train to Potsdam Hauptbahnhof: the terminal station. The journey takes 40 minutes and arrives in 10 to 30-minute intervals. If you prefer that we arrange a vehicle and driver for your Potsdam excursion, write to us at info@insightcities.com for details and pricing. 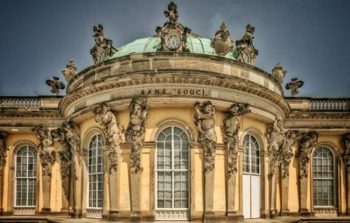 Sanssouci Palace offers visits to its interiors only as audio-guided tours. Therefore, you will need to book your timed tickets in advance or email us and we can assist you with your booking. One option is to end your tour with our guide at the palace and you can continue with your audio-guided tour. Alternatively, you can extend your tour with us for a longer day with our guide that includes Sanssouci Palace and/or Cecilienhof Palace interiors. Contact us(opens in a new tab) or email us at info@insightcities.com(opens in a new tab) for pricing and details.

It is also easy to rent bicycles in Potsdam. If you would like to arrange your Potsdam excursion as a bicycle tour, we have several historian guides on our team who would love to lead you by bike! Write to us at info@insightcities.com for information and pricing.

Having true scholars organize and conduct such tours is a great concept which really added a special depth and created a uniquely special learning experience to these tours. Also, being private tours, our sights and discussions were not limited to just the actual tour objectives but we could digress into other subjects and sights that were of interests to us. The guides for both of these tours never had any trouble at all answering any of our questions and in fact could provide fascinating details that we would have never known otherwise.

Definitively choose Insight Cities if you want to get a different perspective on the city. Our tour was filled with knowledge that I don’t think we could get anywhere else.