Reflect on the Victims of Nazi Genocide 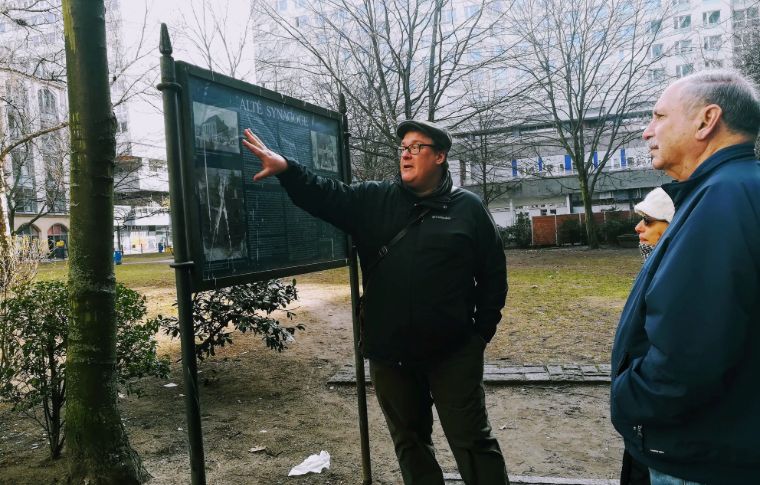 Your Jewish Berlin tour begins at the remaining foundations of the so-called Old Synagogue, where your guide, a Jewish Studies scholar, will help you to grasp the challenges faced by German Jews during the Middle Ages and Renaissance. Our major focus, however, will be the main sites of Berlin’s 19th- and 20th-century Jewish history: the districts of Spandauer Vorstadt and Scheunenviertel (known as the “Barn Quarter”) in Berlin-Mitte. Here we learn of the profound contribution of Berlin Jews to German culture even as they faced centuries of persecution, tragically culminating in the Holocaust. You’ll leave this tour with a new appreciation of the Jewish experience in Berlin and of the forces of antisemitism and Nazi fascism that led to modern genocide.

Reflect on Jewish philanthropy and community in the former Jewish orphanage in Auguststraße and the Jewish Cemetery on Große Hamburger Straße.

Learn about the leading roles that assimilated Jews played in every field of German culture: journalism, education, science, literature, art, music, and business.

Discuss the sinister events leading to Hitler’s “Final Solution” while visiting memorial sites such as the Missing House graphic, the Abandoned Room, and some of the city’s 1,400 Stolpersteine (stumbling cobblestones).

Take in the Neue Synagoge, built 1859-1866 to celebrate Jewish assimilation in Germany, where we outline the growing revival of Berlin’s Jewish community today.

End by paying our respects at Berlin’s Holocaust Memorial, while exploring its symbolism and present-day Germany’s often-impressive policies towards responsibility and acknowledgment.

Although the Jewish experience in Berlin began in the 13th century, intolerance was so entrenched that it took hundreds of years before the city’s first synagogue was erected in Heidereutgasse in 1714. Your tour begins at the remaining foundations of this so-called Old Synagogue, where your guide, a Jewish Studies scholar, will help you to grasp the challenges faced by German Jews during the Middle Ages and Renaissance. They’ll also give you an appreciation for the rich cultural life developed by Berlin’s Jewish community in spite of their vulnerable status. 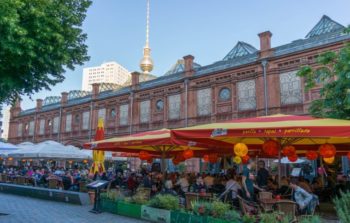 Our major focus, however, will be the main sites of Berlin’s 19th- and 20th-century Jewish history: the districts of Spandauer Vorstadt and Scheunenviertel (known as the “Barn Quarter”) in Berlin-Mitte. Taking in the graceful avenue, Oranienburger Straße, where the magnificent New Synagogue was erected in 1866, you’ll learn of the conflicts between German Jews and their Christian neighbors. Tensions also existed between the mostly assimilated German Jewry and the so-called Eastern Jews (or Ostjuden) who filled Berlin in the 1920s after fleeing dramatic antisemitic violence in their homelands. 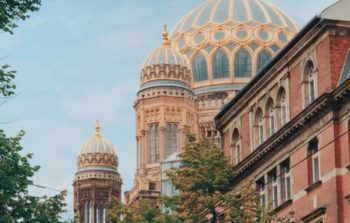 Many of these refugees were orthodox and poor. With them, they brought a completely new infrastructure for Jewish religious and cultural life in Berlin. Examining visual material such as photographs from Jewish street vendors and old newspapers, we consider how Jewish life in Berlin became far more visible in the 1920s. For precisely this reason, the established German Jewish community often regarded the influx of Eastern Jews as potentially dangerous for their own status within German society. One response was their support for institutions of social welfare and education. We stop at an example of this philanthropy, the former Jewish orphanage in Auguststraße, which today is home to an exhibit hall and a coffee shop (if the current exhibition is dealing with a topic related to our tour, a visit to the exhibition will be taken into consideration). The Jewish Cemetery on Große Hamburger Straße also gives a vivid impression of Berlin’s Jewish presence.

Assimilated Jews in Berlin played leading roles in every field of German culture: journalism, education, science, literature, art, music, and business. During the short, anxious Weimar era (1919-1933), the great painter Max Liebermann created his works and became head of the Berlin Secessionists. Kurt Weill redefined musical theater. Walter Benjamin penned the whimsical academic essays that inaugurated a philosophy of modernity. Despite the prominence of such figures, anti-Semitic violence of a new degree broke out as early as November 1923. 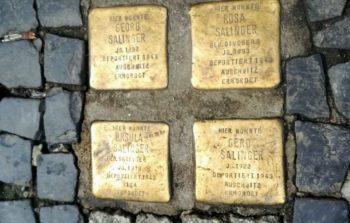 In front of the former Labor Office in Gormannstraße, we talk about the so-called Scheunenviertel Pogrom. By 1933, the “Barn Quarter” became one of the first settings of the Nazis’ political purges in the capital city. We discuss the series of sinister events that lead to the full implementation of Hitler’s “Final Solution” in Berlin while visiting sites that recall the Holocaust, such as the Missing House graphic at Grosse Hamburger Strasse 15/16, which lists the names of former Jewish residents, the Abandoned Room at Koppenplatz, which memorializes the Jews taken on the November 1938 Kristallnacht, and some of the city’s 1,400 Stolpersteine (stumbling cobblestones), reminders of the Shoah’s victims.

Before leaving the “Barn Quarter,” we’ll stop at the kosher coffee shop Beth-Café to consider the renewal of Berlin’s Jewish life today and to admire the ornate Neue Synagoge (New Synagogue), the architecture of which symbolized and celebrated Jewish assimilation in Germany. It is thus, one of the most moving sites on our walk. Today, it is home to the Jewish community revival in Berlin and moreover, houses a gallery with changing exhibitions that you may wish to visit at the tour’s conclusion. 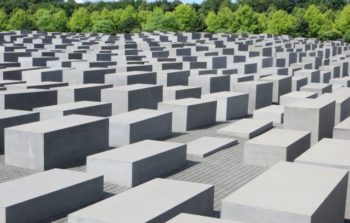 Taking the metro, we conclude at Berlin’s Memorial to the Murdered Jews of Europe, also known as the Holocaust Memorial, designed by architect Peter Eisenman.  Your guide can inform you of the memorial’s controversies and symbolism and of modern Germany’s many impressive policies of acknowledgment while respecting your personal experience of passing through the sobering labyrinth of 2711 concrete slabs.

Our guide was extremely knowledgeable and took us to places that I never would have found on my own. It was a great experience and I would highly recommend this tour.

Heather, our tour guide, was the best person to take this tour with. Her passion of the topic really shines through into the tour, and I learned so much from it. She is very happy and open to discuss things with you, and is willing to answer any questions you have. Would highly recommend to those who are looking for an overview of all Jewish history in Berlin, as well as specific monuments, plaques, and museums. Fabulous tour.

Isabel Daniel was an amazing guide. She answered every question we asked and was the nicest young lady you could possibly have as a tour guide. By the end of the tour we were inviting her to visit us in Los Angeles. She is completing her Ph.D in the topic we were exploring on this tour. We came away with a much better understanding of the history of Jewish life in Berlin from its beginnings in the 12th century. We highly recommend this tour. This small group turned out to be just myself and my husband.

Our friendly and knowledgeable guide Nadav Jakob met us at the hotel for a private afternoon walk including several minor rides by buss, S- and U-bahn because of the nonstop rain. Despite the weather and very much thanks to Nadav Jakob we had an informative and at times emotionally haunting walk experience.