Once a 19th-century worker’s district and former part of West Berlin, Kreuzberg has reshaped itself through immigrants, capitalists, anarchists, artists, WWII bombs, and Cold War suppression. Today, the neighborhood is a buzzing hub of counterculture, cafes, art, bars, and a salad bowl of immigrants providing diverse cuisine options and market goods. This 3-hour Kreuzberg tour highlights the neighborhood’s authentic identity, as it continues to push back against gentrification and development.

Start off at the Oberbaumbruecke, Berlin’s most beautiful bridge, passing the main landmarks of SO36, the eastern half of the district named after its former postcode

Ponder what remains of the Berlin Wall before continuing past street art-filled walls, abandoned buildings, and plots of land that have been creatively transformed into art hubs.

Discover the idyllic Viktoriapark (one of Berlin’s most popular green spaces) and the 120-year-old market hall, Markthalle 9, where locals trade in artisanal and trendy food products.

Uncover the Turkish influence in the district, through bustling streets filled with shops and colorful markets full of flowers, spices, and delicious take-away foods.

The lively district of Kreuzberg, just south of Berlin’s city center, is a 19th-century worker’s district and formerly part of West Berlin, that has seen it all over the years. Immigrants, capitalists, anarchists, artists, WWII bombs, the Cold War decades, each—in their turn—have greatly influenced the district. It’s the one Berlin neighborhood that is known, loved, and feared across Germany as the birthplace of the counterculture for which the whole city has become famous in recent decades. 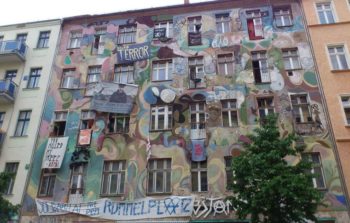 Starting off at the Oberbaumbruecke, Berlin’s most beautiful bridge, this 3-hour tour with an urban historian takes you past the main landmarks of “SO36,” the eastern half of the district, named after the old postal code. Your guide will offer insight into the area’s rough history and the fast-moving events that are shaping its future. The tour also allows you to take it easy, to experience the Kreuzberg way of life that attracted the likes of rock legends David Bowie and Iggy Pop to haunt these streets during the Cold War 70s. 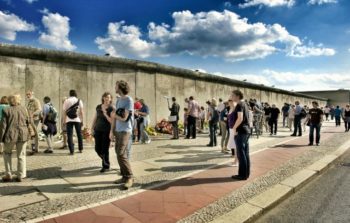 After pondering the remains of the Berlin Wall, your guide will help you to explore the creative uses of abandoned buildings and plots of land as art hubs, and to grasp the importance of graffiti and street art to Kreuzberg’s look, feel, and identity. Then discover the graceful Viktoriapark (one of Berlin’s most popular green spaces) and the 120-year-old market hall, Markthalle 9, where locals trade in artisanal and trendy food products.

Next, you’ll move through areas brimming with Turkish immigrant culture abounding in shops and in colorful markets full of flowers, spices, and delicious take-away foods, such as deep-fried spinach and cheese gözleme, falafel sandwiches, and freshly pressed pomegranate juice. Having gained a rich sense of Kreuzberg’s kaleidoscopic culture, you conclude by discussing the controversial riverside development plans that today threaten to gentrify a district that prides itself on authenticity.

This tour was one of the highlights from our recent trip abroad. The guide is extremely knowledgeable of Berlin and is a lot of fun to spend time with.

We had an outstanding 3+ hour walking tour of Berlin with Peter Bijl through Insight Cities. He was extremely knowledgeable and very generous with his time. A wonderful way to learn about and experience the city and its history.

David Bowie & the End of the World