On this introductory Berlin city tour, we’ll explore iconic landmarks, surveying the political and ideological forces that prompted genocide and global war during the 20th century. The tour will highlight insights into the Nazi and Cold War eras, while looking into Prussia’s transformation into a dominant military power during the 1700s and how this set the stage for the great tragedies of modern history. Your expert guide will help you discover how Germany’s capital has confronted its dark past and renewed itself as a city renowned for multiculturalism, tolerance, and creativity.

Trace the path of the Berlin Wall and view the dramatic Holocaust Memorial before crossing through Tiergarten Park and reaching Germany’s parliament, the Reichstag.

Pause at the statue of Frederick the Great and consider his role in shaping Prussia’s future as the German Empire.

At the site of the 1933 Nazi book-burning, learn about Hitler’s rise to power before a contrasting walk across Museum Island, where Berlin developed into a cultural center in the 19th century.

Finish at Checkpoint Charlie, where thousands of East Germans poured across the border to end the Cold War.

Berlin has been at the epicenter of the most catastrophic conflicts of modern times but the seeds of these hostilities were planted centuries before. This 3-­hour Berlin city tour presents a broad view of the political and ideological forces that unleashed genocide and global war in the 20th century. Exploring the German capital’s iconic landmarks while emphasizing the tumultuous Nazi and Cold War eras, you will learn how tiny Prussia’s violent transformation into Europe’s dominant military power in the 1700s set the stage for the great tragedies of recent history. At the same time, your guide will help you to consider present-day Berlin’s successes, confronting its dark past and renewing itself as a dynamic modern capital known for multiculturalism, tolerance, and creativity.

We begin on Unter den Linden, Berlin’s royal boulevard, and follow in the footsteps of Napoleon past historic embassies and hotels to Pariser Platz and the Brandenburg Gate, the iconic symbol of reunified Germany.

Tracing the path of the Berlin Wall, we experience the dramatic Holocaust Memorial in the shadow of Potsdamer Platz, the brief epicenter of decadent 1920s Berlin now rebuilt with 21st-century skyscrapers. Crossing through the Tiergarten Park, we reach the home of Germany’s parliament, the Reichstag. A fire that destroyed the building in 1933 was used by the Nazis as the pretext to suspend civil liberties and arrest political opponents. This is contrasted with the grand glass dome created for its reopening in 1992 by architect Norman Foster (complete with walkways that look down into parliament). This architectural style provokes a discussion about the intention of the cupola as a symbol for Germany’s reunification, transparency, and commitment to democracy. 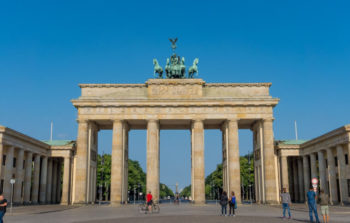 Returning to Unter den Linden, we pause at the famous equestrian statue of Frederick the Great to consider Prussia’s “Poet King” and his role in shaping the militaristic and cultural orientations of the future German Empire. At Bebelplatz, the site of the 1933 Nazi book-burning, you’ll learn about Adolf Hitler’s rise to power and its terrible consequences. As you cross Museum Island (Berlin’s answer to the Louvre), we will discuss the city’s 19th-century development into a cultural center. 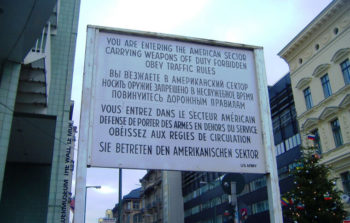 Next, the lively Hackescher Markt square, a charming pocket of pre-war Berlin, affords us a chance to ramble through a network of preserved Art Nouveau courtyards and glimpse the city that was, untouched by war and gentrification.

We finish our tour at Checkpoint Charlie, the legendary crossing point from West Berlin to East. This is the point where thousands of East Germans poured across the border bringing the Cold War to an end in 1989. Concluding here, we discuss the East/West divisions that continue to impact Berlin even as the city evolves new sensibilities and in new directions.

As architecture fans we particularly loved have an architect lead the three of us through Berlin. Great pace. We covered a lot of territory and learned a tremendous amount. And Dan left us at a delicious Italian restaurant for our lunch.

Isabel Daniel was an amazing guide. She answered every question we asked and was the nicest young lady you could possibly have as a tour guide. By the end of the tour we were inviting her to visit us in Los Angeles. She is completing her Ph.D in the topic we were exploring on this tour.