If Vaclav Havel forever left his mark on Czech politics, his grandfather Vacslav Havel left his concrete and marble mark on the streets of Prague: Palac Lucerna, the Lantern Palace, is his legacy. Grandpa Vacslav finished construction on the Palac in 1911, after spending some time in New York City absorbing its art deco vibe. He designed and built Lucerna in a style which perfectly unites classical architecture with the modern: concrete columns meet marble archways, and ornate metal melds with vast glass window surfaces. The lantern motif is evident everywhere, from the building facade to the info booths. The interior passage is the first of its kind in Prague, and its glass and metal walls and ceiling skylights give the illusion of passing through a magic lantern into a grand space which marries culture with couture. Art, architecture and entertainment come together to form the great grandfather of the modern shopping mall.

Ascend the steps under a magnificent red marble archway and you are immediately greeted by the bust of the founder and architect Vacslav Havel, the Grandfather of Czech President Vaclav Havel. Enter the Cafe to the left of Vacslav. The beautifully decorated cafe is also the lobby to the cinema. The Lucerna Cafe is a lavish greeting welcoming you into the wondrous space beyond the cinema doors: Kino Lucerna is probably the most impressive cinema I’ve ever visited. The decor of the Golden Age of Cinema is called up in every detail: vast ceiling space sprawling with golden wood paneling and carvings, with arched balconies worthy of a fine opera. The space was designed at the magic merging of two eras: the classical and the modern, and the decor is equal parts baroque opulence and art deco audacity. You can easily envision operas and orchestras filling the house with warm sound, seamlessly ushering us into the silent and sound film eras. I used to attend films there just to be ensconced in the sensual decor. Even if the movie sucked, just being in the space was aesthetic satisfaction in its own right. At the very least, you were in good company: Maybe Kafka or his pal Max Brod sat in your seat to take in a movie in the Golden Age of Cinema.

Lucerna’s Storied Past: Nazis, Commies and Jazz (Oh My!)

During the crazy communist years (1948-89), the State seized all privately owned property, including the Palac Lucerna. It wasn’t until 1990 that the Havel family would get their precious heirloom back during the property restitution period following the Velvet Revolution. And in doing so, the Havels saved Lucerna from being relegated to the dustbins of history—or maybe becoming a massive McDonald’s. But such a turbulent history cannot be easily erased. 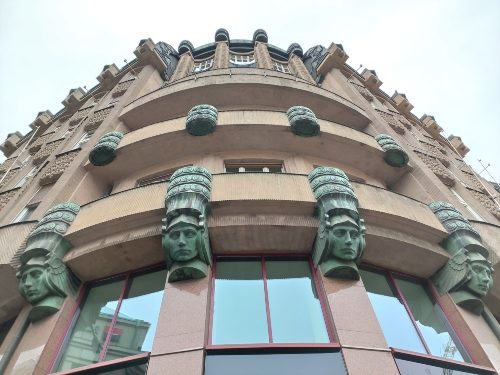 Lucerna’s spaces weren’t always filled with culture and commerce. During the Nazi occupation, Nazis met in Lucerna’s halls to plan the Germanization of Bohemia. Fortunately, their days were numbered, but the Communist successors to the Nazis were equally unkind to their host country. Their quasi-cryptic meetings (some of which were held in Lucerna’s great hall) under the auspices of peace and prosperity following the Nazi occupation, eventually degraded into a new form of oppression under communism proper. When the Czechs didn’t respond to the gentle art of propaganda persuasion, their government was co-opted in the Communist coup of 1948.

But Lucerna’s spaces weren’t always defaced by the greasy stains of Nazis and Commies. The Lucerna Music Bar has hosted the finest names in jazz: Louis Armstrong, Ella Fitzgerald and Josephine Baker are among the many legends who have performed there. 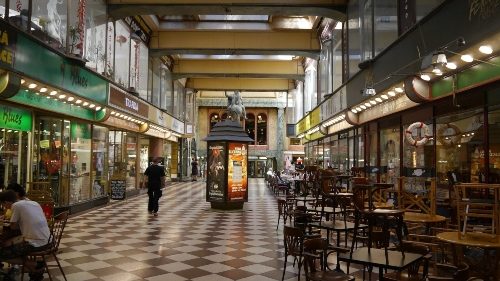 Today you can pass through the tread-worn marble floors of the Lucerna Passage and look up to see an unusual site: a horse statue hangs upside down with is rider firmly planted on its belly. The horse’s tongue hangs out of its mouth, but its rider sits alive and well on the belly, spear in hand and loins girded for battle. The famous Czech sculptor and enfant terrible David Cerny is probably making an political-artistic statement about modern Czech dissatisfaction with its political system. The horse sculpture is clearly a mock-up of the equestrian statue of King Vaclav, who is seated on his trusty steed at the Museum end of Vaclavske namesti (Wenceslas Square). Whether the surviving Havels agree or disagree with Cerny’s artistic sentiments, one thing is clear: it’s a Vaclav sitting on the dead horse, and it is apparently he’s there to stay. 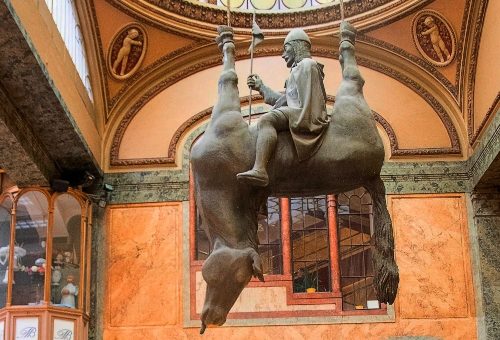 And so is the same musical spirit which imbues Lucerna’s hallowed halls: today I walked by a line of young people sitting on the ground outside of the Lucerna Music Bar ticket booth. They had snacks, water and blankets to keep them company in the 100 meter long line. Some of them looked as if they had camped there overnight. They were clearly waiting for a new generation of legends to breathe a breath of fresh air into Lucerna’s waiting chambers.