This 3-hour Vienna Art Nouveau tour showcases Otto Wagner’s stunningly designed metro stations and other buildings that reflect the Art Nouveau movement sweeping turn-of-century Europe and flowering in the hands of Wagner and fellow artistic legends, Gustav Klimt and Koloman Moser. Your expert guide helps you understand the philosophy behind Secession and Art Nouveau, pondering the symbols and materials favored by its practitioners: floral forms in linear metalwork, a fascination with curvy typography that exposes its origins in commercial art, posters and graphic design, its oriental influences and Fin de siècle eroticism. Riding the metro and visiting Vienna’s famous Secession House, you also discover the style’s links to the urban expansion and the rising cosmopolitanism of Viennese society in 1900.

Explore the elegant former metro pavilion at Karlsplatz and discover Vienna's legendary architect and Art Nouveau designer, Otto Wagner. April to October, we include a visit inside to peruse the small but fascinating Wagner Museum.

Take in the famous Secession art building: the emblem of Viennese Jugendstil, including a visit inside to discover the famous Beethoven Frieze crafted by Gustav Klimt.

Visit the Emperor's exclusive station, erected outside Schönbrunn Palace as a symbol of imperial support for the construction of Vienna's metro line.

Enjoy Stadtpark Station, the best preserved of the original metro stations still in use today.

Conclude at Vienna's famous Postal Savings Bank, the last iconic work by Otto Wagner which marks the transition from the floral forms of art nouveau to a more modern, industrial design.

Metro fare: You will need to use public transport a few times since the distances between some key sites are too far to walk. If you do not have a multi-day visitor’s transit pass to Vienna already, we suggest that you purchase the day metro pass. If you cannot purchase it in advance, your guide will help you purchase it at the first metro station on the tour.

Admission into exhibitions, your guide will help you to purchase the tickets.

Note: Only open from April to October

Note: Not open on Mondays

The question of efficient infrastructure is a topic that inevitably dominated Vienna during the late 19th century, as the city’s population underwent rapid expansion. The capital city of an Empire, Vienna had become a magnet for people from all over Europe looking for work. There was a high demand for laborers of every type since, just a few years earlier, Vienna’s venerable medieval city walls had been demolished in order to make way for the grand boulevard of the “Ringstrasse” and the construction of the impressive buildings that lined it. The need for a modern system of public transportation was, therefore, a logical consequence of the city’s demographic and topographic upheavals. Thus, in the latter part of the century, Vienna’s parliament engaged urban planners to draw up metro lines that were to connect the suburbs with the city center along the Ring. 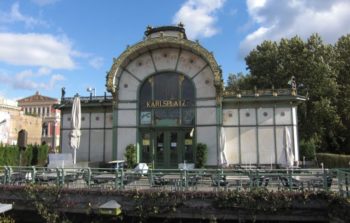 The architect chosen for this massive and sensitive assignment was Otto Wagner. Wagner was already famous for giving materials and functionality a leading role in his work in contrast to the tendency of many of his peers who tended to privilege ornate decoration. From the beginning, Wagner’s aim was to create a metro design that would be iconographic, easy to recognize, and would fit equally into different regions of the city, highlighting Vienna’s cosmopolitanism. It is, therefore, not surprising that he chose to work with the international avant­-garde style of Art Nouveau or “Jugendstil” as it is called in German. The outcome was a series of design elements for Vienna’s metro, including fences, doors, and stone carvings that could be combined and re­combined according to the different needs of each station and the surrounding area. We will visit two of the remaining stations to begin discussing the idiom of Viennese Art Nouveau and its ideological underpinnings.

Starting our Vienna Art Nouveau tour at the beautiful pavilion at Karlsplatz, we lay a foundation for our discussion by visiting the small Wagner Museum (only available April to October). From here we walk to the famous Secession art building, the icon par excellence of Viennese Jugendstil, exploring the exterior and visiting inside to take in Gustav Klimt’s famous Beethoven Frieze, we learn about the development of Vienna’s Secession group. At Majolika House, the nearby apartment house by Otto Wagner, we continue to flesh out the philosophy behind Secession and Art Nouveau, pondering the symbols and materials favored by its practitioners: floral forms in linear metal, a fascination with curvy typography that shows its origins in commercial art, posters and graphic design, its Fin de siècle eroticism and oriental influences. 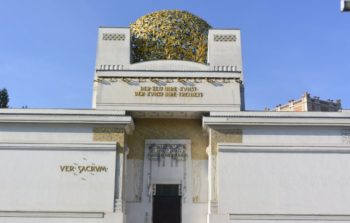 Hopping on the metro at Kettenbrücke Station, we pay a visit to the imperial station. This outstanding building was erected outside the Schönbrunn Castle solely for the Emperor to use. The crown jewel of the line, this station, had a symbolic meaning as well, namely to show critics of Vienna’s metro that the emperor supported the line. In this small but dynamic building, we will recognize all the elements that we encountered throughout the walk and at the other stations, while noting the methods used by Wagner to translate the generally bourgeois style of Art Nouveau into an aesthetic with imperial grandiosity. 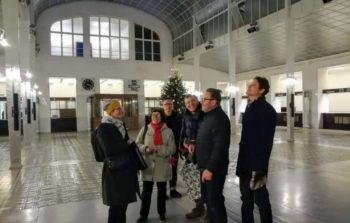 Heading back to the center, we enjoy Stadtpark Station, the best preserved of the original metro stations still in use. Our conclusion is the last iconic work of Otto Wagner, Vienna’s famous Postal Savings Bank, which has a totally different style than his metro stations or Majolika House. No flower decoration, nothing colorful. Here we can see how Vienna’s great pioneer of art nouveau actually ended his career marking out the transition to the minimalist, industrial design to come.

I thoroughly enjoyed my walking tour of the Art Nouveau buildings of Vienna. It gave me a greater appreciation of the wonders of the city, as well as made me aware of this style of architecture in other cities I visited afterward, especially in Budapest.

Suzanne was extremely knowledgeable and enthusiastic about Viennese architecture. We learned a lot from her, and it has formed the core of my understanding of Vienna circa 1900, the Secession, and how those themes live on to this day. She tailored the tour to our needs as we were the only clients. We took the U4 train line to save on walking and warm up between discussions. We had a day pass so it worked well.

Ilse was a wonderful guide – knowledgeable, entertaining, flexible. The tour was an absolute highlight of our visit to Vienna!