The scene is Vienna: Christmas 1857. The talk of the town and media is the announcement by the Austrian Emperor that he is going to tear down the outdated, medieval city walls to make way for a modern boulevard around the old city center. The ring­-shaped boulevard will symbolize the wealth and power of Vienna and its readiness for modern times, enabling the city to compete with the urban reconstructions that made 19th-century Paris and Berlin famous for grand avenues and sweeping vistas. This Ringstrasse Project tour takes you along this outstanding boulevard and gives you an in­-depth introduction to the political and philosophical motivations behind the massive renovation, the great architects who participated, the civic institutions and private residential palaces they built, and the new social elites and cafe society that the Ringstrasse enabled to rise in Vienna’s modern era.

Become familiar with the most influential architects of 19th-century Vienna.

Taking in the Ring’s extraordinary residential palaces – Imperial Palace Neuberg, Palais Todesco, and Palais Coburg, we discuss the modern economic elite who consolidated their cultural and social influence by moving into the new district.

Conclude with a visit to Cafe Schwarzenberg, established in 1861, to get an insight into the thriving Vienna café culture in the latter half of the 19th century, which made the Ring a place to see and be seen from the moment of its completion.

This Ringstrasse Project tour, in the company of a historian, takes you along this outstanding boulevard and gives you an in­-depth introduction to the political and philosophical motivations behind the construction. In addition, you will learn about the social and geographical impact it had on the city in the years to come. We start off in front of the impressive City Hall (Rathaus), one of the landmarks along the Ring and a beloved meeting point. 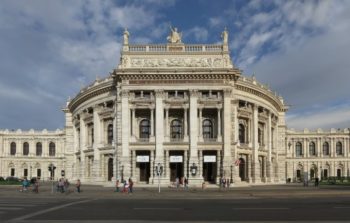 When the mammoth project of replacing Vienna’s medieval city walls with a modern avenue was introduced, it was proclaimed that a large number of public buildings were to be placed along the Ringstrasse – the Vienna Opera, Kunsthistorisches Museum, Rathaus, Vienna University, the Postal Savings Bank by Otto Wagner.  During our discussion, we will consider the historical style in which these public institutions were built and why certain styles were chosen for certain buildings. You will also become familiar with the most influential architects along the Ringstrasse. For each of these architects, winning a commission in this prestigious project meant a completely new status for their careers. 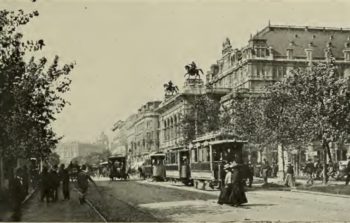 The construction of the Ringstrasse was to be funded through the building of privately financed apartment houses. It proved difficult, however, to sell these properties. First of all, it was obvious that it would take years before the Ring project would be finished. Nobody was immediately attracted to the prospect of living on a building site. Second, the established nobility of Vienna feared the unknown of future occupants in an entirely new district. Because The Ring was a terra incognita: unmapped in society; any nouveau riche could become your neighbor! The story of the social elite who ended up living along the Ringstrasse will add another dimension to our discussion as we walk along the Ring, including many industrialists, entrepreneurs, and many prominent Jewish Viennese citizens who became economic and cultural leaders in the more open climate of the 19th century.  Your delightful walk includes elegant private residences – Imperial Palace Neuberg, Palais Todesco, and Palais Coburg. 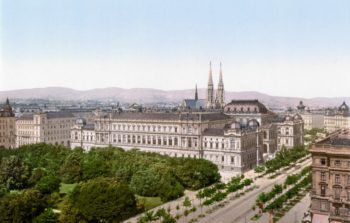 Of course, a boulevard functions as a kind of public catwalk and the Ring was most definitely the place of places in Vienna to see, be seen, and meet with people, from the moment of its completion. Therefore, several cafes and restaurants were established along the boulevard. At the end of our tour, we will visit Cafe Schwarzenberg, established in 1861, to get an insight into the thriving Vienna café culture in the latter half of the 19th century.

This tour can also be booked as a children’s family tour where your guide focuses on the symbols on various buildings and on everyday life in Vienna around 1900. Send us an email at info@insightcities.com to find out more.

No one else booked this tour but myself…and it still went on!! The personalization was amazing. Out of all the tours, this one really made me appreciate Vienna’s history and culture.

How lucky for us that no one else showed up and we had Else all to ourselves. This was the best tour I’ve ever taken. My husband had trouble walking so she slowed down to our place and answered our every question. Absolutely fantastic guide.