This full-day tour begins by taking in Salzburg’s narrow medieval streets, grand Baroque squares, and key monuments. We then drive out of the city for a Salzkammergut tour, exploring iconic sites from The Sound of Music and the shimmering Lake District. This beautiful part of Austria offers us splendid architecture, glorious natural scenery and quaint towns framed against soaring Alps. Your expert guide will acquaint you with local customs and a regional history that spans from medieval salt commerce through the Habsburg Empire and both World Wars. You will encounter fascinating details and the most impressive sites and stops on this day trip from Salzburg.

Drive out of the city to enjoy a breathtaking view of Leopoldskron Chateau where The Sound of Music was filmed while learning of Austria’s history in the two World Wars, providing context for the film and its characters.

Admire the idyllic Lake Wolfgang and Alpine scenery as seen from the aerial cinematography of the famous opening credits of the film.

Take a lunch stop at the charming lakeside town of St. Gilgen, delving deeper into the history of the district from the Celts, Romans, Bavarians, and Slavs.

In the warmer months, stroll around the spa town of Bad Ischl, where the Habsburg Emperor used to spend his summers and where his heirs reside today.

In the cooler months, enjoy a variety of scenic wintry lookouts over frozen lakes and Alpine ridges.

Check out our optional extras (picnicking and/or boating) to add on to your full-day tour.

Includes a pick-up from your central hotel or flat

Groups of over 6 should contact us at info@insightcities.com in order to get a special rate for their party.

Lunch at a charming local restaurant is self-paid.

Read about our Salzburg guides

This 7-hour day tour aims to get you acquainted with Salzburg as well as its glorious surrounding Salzkammergut (or Lake District). We start on foot with an exploration of Salzburg’s Burgher Town with its narrow, crooked little streets and the unique passageways of the so-called “Getreidegasse.“ Salzburg’s commercial center still remains intact in its medieval charm contrasting the great spacious Baroque squares of the district where the Archbishops presided over the city in their residence. Here we also consider the extensive influence of Italian Baroque on Salzburg and the teams of Italian architects and landscapers who were imported to give the city its grand new look in the 1700s. To enhance our appreciation of Salzburg’s glorious Baroque heritage, we stroll through legendary Mirabell Palace and Gardens with elaborately designed flower beds, mythologically-inspired statues and fountains. The complex is listed as a protected cultural heritage monument by UNESCO, along with the whole historic Salzburg city center. 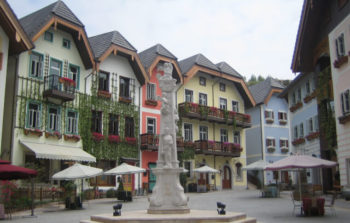 We pass by Mozart’s Birthplace and visit the Mozart Residence, where he lived until the age of 17, exploring the exhibit showcasing his musical genius. Moving on to the Festival Halls, we take in St. Peter, the monastery of the Benedictines dating back to 696 AD. Along with stories of Salzburg’s medieval salt commerce and medical innovations, we follow the childhoods of Wolfgang and his sister, Nannerl Mozart, while helping you discover Salzburg’s local customs and traditions, cultural and political history, and enviable musical heritage.

Throughout the tour, we discover the true story of the global movie classic The Sound of Music‘s von Trapp family, one of the authentically great refugee tales from the Second World War. The famous “Do-Re-Mi” sequence was partly filmed at the Mirabell Gardens and fans of the film will recognize many other sites used as settings for the giddy tale of Maria and the von Trapp children. 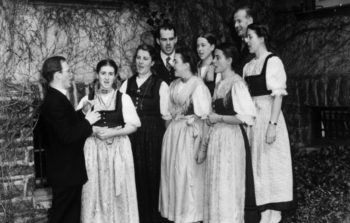 Finishing our tour of Salzburg center, our Mercedes van and driver will whisk us outside of the city to view the elegant Leopoldskron Chateau, featured in the film as the von Trapp family home and the famous gazebo where Leisl and Rolf danced, now moved to the grounds of Hellbrunn Palace. We’ll learn more about the fabulous Austrian traditions of yodeling, folk dance and marionette theater depicted in the movie. At the same time, we’ll take in the complex history of Austria during both World Wars (not forgetting that Captain von Trapp was a decorated naval military officer in the first global war) and how the Great Depression and the collapse of the Habsburg Empire led to fascism and Austria’s annexation into Nazi Germany, while taking care to note the democratic tradition revived in Austria today.

Moving on to the Lake District, we admire the beautiful Lake Wolfgang and soaring Alps (famous from the aerial cinematography of the famous opening credits of The Sound of Music). For the film’s fans, we can also include stops at the Nonnberg Abbey where Maria was a novice and the wedding church at Mondsee. 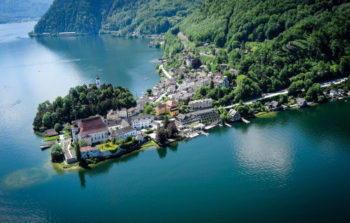 During a lunch stop at the charming lakeside town of St. Gilgen, we delve deeper into the history of the Lake District from the Celts to Romans to Bavarians and Slavs, all groups who enjoyed the beauty and salt deposits of this stunning region. In April to October, we move on to a stroll around the spa town of Bad Ischl, the famous town where Habsburg Emperor Franz Joseph l once spent his summers in the elegant Kaiservilla residence, and where the Habsburg heirs still live today. In colder months, we choose our final stops from a variety of scenic wintry lookouts over the Lake District and picturesque towns nestled against Alpine ridges.

This tour can be adapted to include various other sites or experiences. For information on pricing and particulars, please contact us.

Add an hour and visit the UNESCO town of Hallstatt.

Do you prefer a picnic with scenic views of the Lake District in good weather months over a restaurant stop? We can arrange a rustic picnic of local cheeses, ham, spreads, dark bread and rolls, grapes, apples, juice, water and wine, local confections and Mozart chocolates.

We can arrange a private 90-minute boat tour for your group on beautiful Lake Wolfgang.

This was just the two of us a very knowledgeable guide, Astrid. We thoroughly enjoyed the chance to explore the city on foot with an insider our guide grew up and lives here in fact, she biked to our appointment. Having the historical background then made the next few days much more meaningful and enjoyable. Money well spent.

We so enjoyed Salzburg. What a fabulous walking tour. Gabe was our guide and he was great. Very knowledgeable. He was very educational. We loved seeing the many beautiful churches. Highly recommend this tour.

We wanted a brief walking tour to introduce us to Salzburg and this was perfect. Liza was the sweetest person and did a great job of working with our small group (4 people) to understand what we wanted to see.

Salzburg & the Sound of Music Tour