Uncover the History that Prompted a New National Style

Explore the radical design aesthetics that swept across Europe and flourished in Prague at the turn of the century. This Art Nouveau and Cubist architecture tour represents a pre-war social elite with new standards for modern luxury, a clubby commercial class that drank absinthe and the first mixed cocktails, booked voyages on ocean liners, and read fashion magazines. It isn’t an accident that most Art Nouveau buildings are hotels, elegant bars, restaurants, and train stations. These were the watering holes of those enjoying the fruits of 19th-century industrialization in the first decade of the 20th century before global war swallowed up their world. During this architecture tour of Prague, you take in the dramatic social and political history of the Czech capital in the 20th century, even while discovering how the style was embraced by the nationalist cause along with Cubist architecture (a building style unknown outside of the Czech Republic). See why this tour was featured in The Guardian(opens in a new tab) as one of the ten best architecture tours in the world and in The Week(opens in a new tab) as one of the five best architecture tours in Europe.

Learn to identify the features of Art Nouveau, from gingko biloba leaves to elaborate lighting fixtures to curvy typography.

Experience exquisite interiors throughout Prague with the help of your expert guide.

Take in the features of Prague’s unique Cubist and Rondocubist architecture, including the House of the Black Madonna and the Legiobanka, built to house the accounts of the WWI Legionnaires.

In France, it was called Art Nouveau and Style Moderne, and once this modern manner dominated the 1900 World Exhibition in Paris, it came to be known as Style 1900; it was also referred to as Style Métro (after Paris metro designer Hector Guimard) as well as Style Mucha (after the great Czech graphic artist whose posters are considered Art Nouveau par excellence). In Munich and Berlin, it was called Jugendstil, and in Austria-Hungary, it was known as the Sezession. Art Nouveau left its mark across Europe and it was eagerly, even ecstatically adopted in Prague.

At the end of the 19th and the beginning of the 20th century, Prague was experiencing a whirlwind of national revival activity and ultimately, this movement was embodied in the form of Art Nouveau. From the Main Train Station and the monumental Municipal House to the entire district of Josefov (the former Jewish Ghetto), Art Nouveau constructions represent some of the most significant sights of this city. 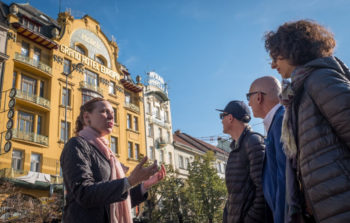 Most of us — when we think of the Art Nouveau buildings and the fine art of the early 20th century — automatically picture intricate floral forms in ironwork and those dreamy, mythic Art Nouveau women with flowing hair. Our guides emphasize that these commonly recognized features of Art Nouveau aesthetics cannot be fully understood without taking into account the new culture of cosmopolitan entertainment, enthusiastic consumption, new opportunities for travel and leisure, the rise of a liberal and reform-minded middle class, and an array of modern technological conveniences.

During this Prague Art Nouveau tour, you’ll learn to recognize the style’s main features from the ginkgo biloba leaves on façades which reveal its oriental influences, to the elaborate light fixtures that mark Art Nouveau interiors, and the curvy, campy typography on building signs that echo contemporary magazine and poster graphics. You’ll visit the beautiful Lucerna bar (built by Vaclav Havel’s grandfather) and the elegant Grand Hotel Europa—examples of a moment of Czech optimism at the turn of the century, signaling the region’s transcendence of older ethnic grievances and its readiness to join Europe by participating in European-wide avant-gardes. 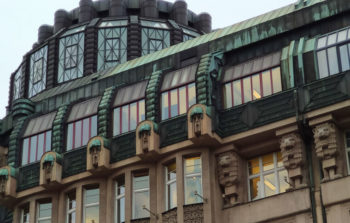 As an important parallel, we visit examples of Prague’s Cubist and Rondocubist architecture (a building style unknown outside of the Czech Republic), including the House of the Black Madonna (created by Josef Gočár in 1910 as an urbane department store). In many respects, Prague’s Cubist architecture surpassed even Art Nouveau as a statement of the city’s newfound sense of modern sophistication and resurgent national identity. We’ll follow the Czech Cubist movement as it emerged and ultimately became “national style,” the only appropriate choice for the 1920’s Legiobanka, built to house the accounts of the WWI Legionnaires who fought for Czech and Slovak nationhood.

The Insight Cities tour of Art Nouveau/Cubist Architecture is a very entertaining and stimulating tour of Prague’s architectural wonders. This tour takes you on a pleasant walk through some of Prague’s most beautiful sites – both the well-known monuments and the city’s hidden gems. During our walk, our guide Bonita offered fascinating details about art nouveau, cubism, and art deco and gave insight into the historical events in Central Europe in the 19th and 20th centuries that led to the formation of these art movements.

Bonita showed us hidden gems of Prague architecture many of which I have walked by for more than 2 years without ever realizing they were there. Other sites I had noticed their beauty without understanding their meaning. I already knew Prague is a beautiful city, but after this tour, the beauty really pops! Bonita’s knowledge is deep, and she answered all our questions — and many interesting questions we didn’t know enough to ask. I suspect we only scratched the surface of she knows. I highly recommend this tour.

We went on this tour with Lenka Phillippova as our guide. She has extensive knowledge of the history of Art Nouveau in Prague as well as history in the city. She showed us some amazing sites that we would never have found on our own. Her command of English was excellent. She was passionate about the subject and she graciously shared her time and knowledge with us. We were mesmerized for four hours ! We were lucky to be the only two people in the group so it was a personalized experience. We cannot recommend Insight Tours more highly- registration was easy, confirmation of the guide and meeting place was detailed and helpful. The tour guides are amazing !

Today we were delighted by the art nouveau and cubist delights of Prague’s Old Town. Having already lived in Prague for a few years, I was familiar with some of these buildings and interiors but knew little of their place in both art and Czech history. Bonita Rhoads is an articulate, knowledgeable and passionate tour guide! She easily brought the art alive by placing it within local and international contexts. The art is amazing. The tour is strongly recommended for visitors and residents. Thanks Bonita!!