Insight Cities is proud to invite you on a unique live stream tour through Prague’s ancient Jewish Quarter. By special arrangement with Prague’s Jewish Museum, you will journey through the interior of the oldest functioning synagogue in all of Europe, the 13th-century Old New Synagogue, exploring its beautiful medieval features and fantastic legends. Next, you’ll take in the ambiance of the 600-year old Jewish Cemetery and the haunting interior of the Baroque Pinkas synagogue, painted with the names of the thousands of Czech Jews lost to the Holocaust. Exploring the Klausen Synagogue (which houses one of the world’s largest collections of Judaica), you’ll enjoy stories of the essential cultural contributions of Czech Jews – from Kafka to Madeleine Albright.

50% of profits go to Prague’s Jewish Museum and Community, both hit hard by Covid-19 and the loss of tourists. This tour also helps Jewish groups across the world to connect in a truly special way even when we can’t meet in person. We can include up to 100 devices (even more by request!).

Enjoy the ancient atmosphere and fascinating legends of Prague’s Old New Synagogue, the oldest functioning synagogue in Europe, while learning of Ghetto life during the Middle Ages.

Ponder the political, economic and ethnic tensions that led to modern genocide while visiting the Pinkas Synagogue’s memorial to the victims of the Nazi’s “Final Solution.”

Journeying through Prague’s Baroque synagogues, learn about Austrian Empress Maria Theresa’s expulsion of the Jews and the gradual emancipation of the ghetto under her son, Josef II.

Discover important figures from Prague's Jewish community, including Franz Kafka and Madeleine Albright - even while you learn of the enduring persecution the community faced, tragically culminating in genocide and cold war suppression in the 20th century, until the fragile revitalization of the community today.

Private tour – $275 (1-100 devices)
This unforgettable, virtual tour is a wonderful chance for Jewish families and groups globally to connect with each other while also supporting Prague’s Jewish Community and Museum with 50% of the profit.

For later tours after closing hours, write us at info@insightcities.com.

You are emailed a special link to join the live stream tour after booking.

Private tours: up to 100 devices

Our walks operate in almost any weather except the most severe. In the case of weather conditions that make our live stream impossible, we refund or reschedule according to your preference.

Read about our Prague guides. Your tour will be lead by a local historian and expert in Prague’s ancient Jewish heritage sites.

In the 20th century, the Czech Jewish communities of Bohemia and Moravia contributed some of the leading figures of modern European culture: Gustav Mahler, Franz Kafka, and Sigmund Freud among many others. But this assimilation was preceded by a thousand years of segregation and even violent persecution at the hands of the region’s Czech and German populations. The earliest records of a Jewish presence in Prague date from the 10th century. By the 11th century, Christian Crusaders bound for the Holy Land carried out the first of several devastating pogroms suffered by the Jewish community. 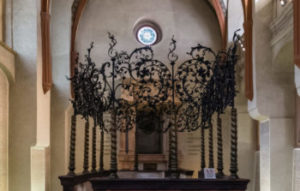 By the 13th century, Jews were forced to live within a walled ghetto, where they remained for 600 years, until 1848. Yet, within those walls, a rich culture and community life developed. Important rights of self-administration were granted to the ghetto from its beginnings because the city depended on its Jewish minority for financial services, which medieval religious doctrine barred Christians from performing. In many respects, Jews thrived in Prague, making up a quarter of the city’s inhabitants and, by the 17th century, emerging as the largest Ashkenazi community in the world.

Your 90-minute live-streamed tour of the Jewish Quarter accompanied by a Jewish Studies scholar focuses on the major sites that make up the Jewish Museum: We begin at the Old-New Synagogue, the oldest functioning synagogue in Europe. Built around 1270, it is also among the oldest Gothic structures in Prague. Prohibited from practicing masonry, the Jews hired Christians to build the synagogue. At the heart of Jewish culture and learning in Prague for more than 700 years, this synagogue serves as the backdrop for our discussion of Jewish religious and social customs during the medieval period. 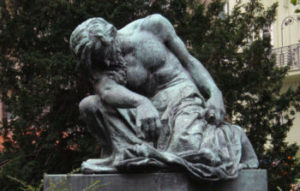 Outside the Renaissance-era Town Hall built by Mordechai Maisel, we help you to envision the golden age of Prague’s Jewish community. Maisel, the mayor of the Jewish Quarter who became Rudolf II’s Minister of Finance, used his fortune to pave the ghetto’s streets, support Jewish organizations and provide charity for the needy. At the same time, Rabbi Judah Loew ben Bezalel (1525-1609) was becoming legendary in Europe for his prolific theological and philosophical writings. Rabbi Loew is celebrated in Prague folklore as the creator of the Golem, a monstrous living being made from clay from the banks of the Vltava River. According to one version of the story, the Golem was created to defend the Jews from antisemitic attacks.

As you continue to move through one of the largest collections of Judaica in the world, the paradoxes of the Jewish experience in Prague become manifest. In 1745, the entire Jewish population was expelled by Austrian Empress Maria Theresa. Yet, only a few years later, facing a financial recession, Prague’s residents demanded their return. In 1782, Maria Theresa’s son, Josef II, issued the Edict of Toleration, granting the Jews religious freedom, eliminating professional restrictions, and allowing Jewish children to attend schools and universities. A grateful community renamed the ghetto district “Josefov,” as it is still known today.

The increasing liberalism and toleration set in motion by Josef II were swamped by the genocidal nationalism of Nazi Germany. Prague’s Jewish community, at the height of its assimilation, was decimated by the Holocaust. We’ll consider the political, economic and ethnic tensions that led to Hitler’s invasion of Czechoslovakia and discuss the implementation of the Nazi’s “Final Solution” in Prague. We’ll also discuss the Jewish experience during the communist years and look at the fragile revival of Prague’s Jewish community taking place today.

I don’t usually leave reviews on Trip Advisor, although I travel plenty for pleasure and work. But Vadim was so wonderful and this tour was so educational, and so much better than anything I’ve ever experienced, that I have to say a little thank you.

This was a wonderful tour for my 85 year old mum and myself, Bonita met us in the hotel and we took the tram to the gardens. She is so knowledgeable and experienced in Prague, the history and insight she gave us was amazing! I would highly recommend for garden and history lovers!

For later tours after closing hours, write us at info@insightcities.com.