Get a Solid Feel for the Imperial City

Vienna is a city bursting with history, dating back as far as when it was a Roman legionary fort to its hundreds of years as an imperial capital and seat of the Habsburg’s Monarchy. This walking tour of Vienna City, led by a local historian, helps you gain a rich overview of the Innere Stadt’s major sites and a grasp of Viennese culture from waltzes and pastries to unrivaled music heritage and world-class museum collections. Along the way, you’ll gain a solid feel for Vienna’s past and present from its centuries as the Austro-Hungarian Empire’s ruling city through the dark chapters of Anschluss and WWII, concluding with the social and political makeup of Vienna today.

Discover the Baroque Hofburg, the Habsburg’s imperial palace while taking in the modernist Loos House standing opposite, a perfect place to start exploring the eternal Viennese clash between tradition and innovation.

Take in the grand Vienna Opera House and Ringstraße, the imperial boulevard, which celebrated its 150th anniversary in 2015, while discussing the 19th-century rise of Vienna’s commercial and intellectual classes.

At the unique Secession building, learn of the city’s turn-of-century avant-gardism, including figures like Klimt and Mahler.

Weave through the MuseumsQuartier, home to Vienna’s world-class concentration of museums, while discussing the present-day cultural and political orientations of Austria and its capital.

“If I speak of Vienna it must be in the past tense, as a man speaks of a woman he has loved and who is dead,” noted Erich von Stroheim (1885–1957) of the capital city of Austria. The Austrian actor and filmmaker of the silent movie era was quite right about Vienna being a city of the past. And not just a city of one past, but of many pasts. Vienna is notable for its layers of history built one on top of the other, the oldest Roman layers reaching as far down as nine meters below the ground level. 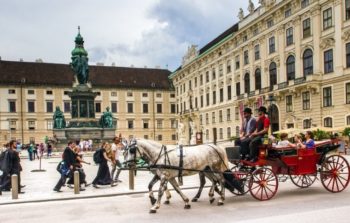 Our tour begins at Michaelerplatz where the Hofburg, the Habsburg’s imperial palace and the seat of power since the 13th century, dominates the square. Clockwise from the palace is the green and gray Loos House, designed by Austrian architect Adolf Loos (1870-1933). The building’s unadorned, modernist style caused such a stir that the emperor, Franz Joseph I (1830-­1916), refused to leave the palace by this gateway after its unveiling in 1910. On top of that, he also demanded that the drapes in all the windows in the Neue Burg wing of the palace be permanently drawn, so he could avoid glimpsing such, “an eyesore” in the vicinity of his imperial abode. In the center of the square is an excavation of 18th-century housing, medieval cellars, and Roman buildings; evidence of the city’s earliest history as a Roman legionary fort, when it was known as Vindobona.

From there, our tour continues down Kohlmarkt and the Graben, currently one of the city’s most fashionable shopping districts and home to such varied sights as a plague column commemorating the 17th-century outbreak of bubonic plague, a Baroque church, grand buildings in many different architectural styles, and the national architectural icon of Austria: Stephansdom. From here, you can see buildings in every direction designed by some of Austria’s most famed architects, including Otto Wagner (1841­-1918), whose Wiener Secessionist style (the city’s answer to Art Nouveau) stands in contrast to Loos’s restrained and unadorned creations. 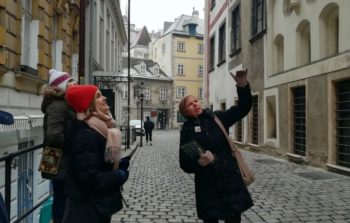 From Stephansdom, we continue our walk to examine the quarter behind the cathedral, with narrow streets, where one still can feel the ambiance of old Vienna. Here we will also find places connected with famous names, like W.A. Mozart (1756-1791) who lived in this quarter during the last ten years of his life, or Prince Eugene of Savoy (1663-1736), who built his famous Winterpalace nearby.

We continue towards the State Opera House, touching Albertina Square where we find remnants of the old city walls and a famous art collection. Then we walk along the Ringstraße, the imperial boulevard built in the middle of the 19th century around the inner city after tearing down the city walls, where we find most of Vienna’s luxury hotels in old palaces. The Ringstraße celebrated its 150th anniversary in 2015. We continue our walk towards the Secession building and pass by the Viennese Naschmarkt, the colorful traditional food market where the Viennese meet to shop and eat!

Finally, we weave through the Museums ­Quartier and Maria­-Theresien­-Platz, home to the city’s largest concentration of museums, while discussing the present-day cultural, political, and economic orientations of Austria and its capital. 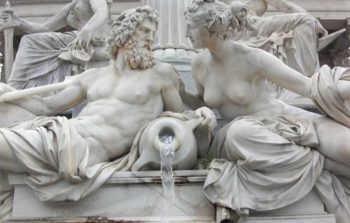 Ilse was extremely knowledgable and engaging and made us feel so welcome. She made the tour a very good experience. With it being just the two of us it became a private tour and she was able to cater to our needs exactly and focus on our interests. We would strongly recommend this tour to anyone visiting this amazing city.

Such a valuable introduction to the city. Our guide Ilse was fantastic. If you are interested in the history and origins of Vienna, this small group talk is great.