This 3-hour Prague walking tour is your orientation into the key sites and dazzling architecture of a city at the center of European history for a thousand years. Our knowledgeable and passionate guides help you to explore Prague’s major landmarks including Charles Bridge, Old Town Square, Charles University, Wenceslas Square, Municipal House, House of the Black Madonna, the Old-New Synagogue. You’ll discover the social and political complexities of the Czech capital, that has developed a vibrant and unique culture despite centuries of foreign domination.

Journey through the Old and New Towns, discovering Prague’s emergence as a center of medieval learning as well as of brutal religious conflict.

Explore twentieth-century events: WW1 and the first Czechoslovak Republic, the Nazi occupation, the Prague Spring protests of 1968 and the Velvet Revolution of 1989.

Stroll by the oldest-functioning synagogue in Europe while learning of Prague’s ancient Jewish community.

Discuss the evolving state of Czech politics and society today, 30 years after the fall of the Iron Curtain.

This three-hour Prague walking tour introduces key monuments and familiarizes you with Prague’s 1,000 years at the center of European history. You’ll start in Old Town Square, the ancient marketplace that established Prague as an important center for medieval trade. The soaring, late Gothic towers of Tyn Church and Old Town Hall triumphantly exhibit the economic and cultural power which Prague achieved during its centuries of Bohemian self-rule. At the Square’s center, the monument to the religious reformer, Jan Hus, stands as the symbol of Czech national identity and resistance to foreign domination. 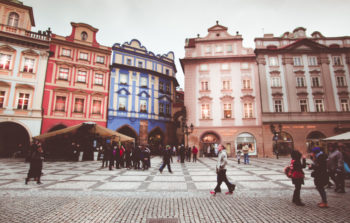 Walking through the winding streets of Old Town, you’ll see monuments and buildings that reveal the social and political complexities of Prague’s multicultural past. At Charles University’s oldest remaining structure, a lovely Gothic oriel window from 1370, you’ll discover the impact that Czech intellectuals have had on their nation’s political fortunes, a tradition that began with Charles IV, the French-educated Holy Roman Emperor who founded the university in 1348 to make his capital city a center of learning.

Wenceslas Square will frame our discussion of Prague’s twentieth-century ordeals. The Nazis held mass rallies here, which was also the point of convergence for the Warsaw Pact tanks that crushed the Prague Spring protests of 1968. Next, the greatest of the City’s many art nouveau masterpieces, Municipal House, sends us back to the twentieth century’s most optimistic moment for Czech independence. Built in 1911, Municipal House flamboyantly proclaimed that the Czechs were thoroughly modern people, ready to join Europe. It was from this hall that the post-WWI creation of the first Czechoslovak Republic was declared. 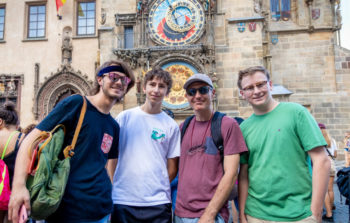 Finally, you’ll walk through the Jewish Quarter. You’ll see the oldest functioning temple in Europe, the Old-New Synagogue, and the rococo Jewish Town Hall. This will lead us to a discussion of the cultural and economic interactions of Prague’s venerable Jewish community with its German and Czech neighbors. Ending our Prague walking tour at the Vltava River, beneath a grand view of Prague Castle, we’ll conclude with a summary of the emerging Czech political system, more than 25 years into the country’s post-cold war revival as a modern democracy.

Vadim was an excellent guide – conceptual and political themes into historical context. As a bonus, the sunset from Vitkov was stunning and something that most tourists don’t get to see. Highly recommended!

We took the tour with Vadim to see the main monuments of Prague. It was SO INTERESTING to learn so much about the history of the city, its culture, the architecture and politics! Thanks a lot!