Experience an Architectural Wonder of the Baroque Era 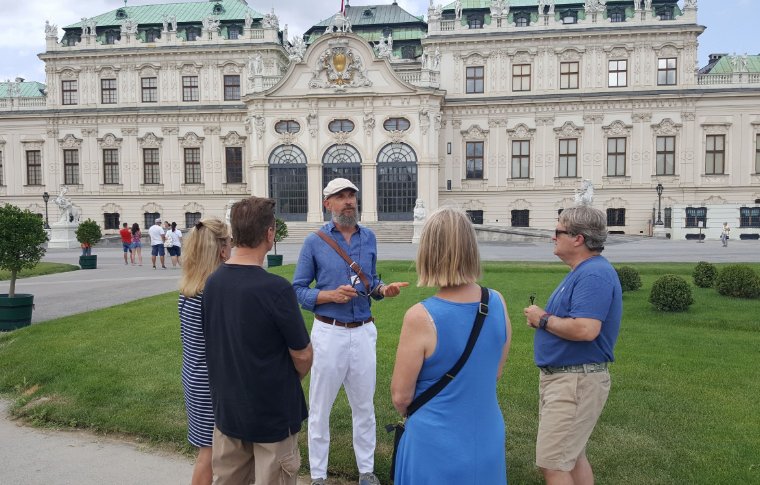 Our Belvedere tour helps you take in an architectural marvel. Your expert historian guide leads you through the lavish summer palace and gardens of Prince Eugene of Savoy, one of the most successful military commanders of all time. The palace and grounds are at once a masterstroke of Baroque landscaping and design, and a testimony to Eugene’s patronage of the arts, which continued beyond his death when the Belvedere became one of the first public museums in the world. Today, the Belvedere Museum exhibits a world-class art collection from the Middle Ages to the present day, featuring modern masterpieces from Gustav Klimt, Egon Schiele, Auguste Rodin, Claude Monet, and Vincent van Gogh.

Explore the formal gardens, the great water basin, and the tiered water fountains filled with statues of nymphs, goddesses, gods, and heroes.

Take in the Belvedere Palace and grounds and learn why it stands among the most significant constructions of the Baroque.

Visit the Belvedere Museum and discover its world-class collection, with the exhibition highlights introduced by your expert guide, an art and architecture historian.

If you wish to visit the Lower Belvedere’s temporary exhibition after your tour ends, you’ll want to purchase a combined ticket to both Upper and Lower Belvedere.

The Belvedere complex is an architectural masterpiece of a bygone aristocratic splendor designed to project a sense of earthly harmony. This terrestrial utopia was founded in the first decades of the 18th century as a summer residence for Prince Eugene of Savoy, the commander-in-chief of the Austrian army and one of the most successful military commanders in modern European history. Among the most significant buildings of its time, the grandiose palace of the Upper Belvedere is a masterstroke of Baroque architecture while the surrounding formal gardens were inspired by classical antiquity. The great water basin in the upper parterre, the tiered fountains and cascades populated by nymphs and goddesses, the marble statues of gods and heroes, and the intricacy of the wrought iron gates still testify to the legacy of Eugene’s patronage of the arts. 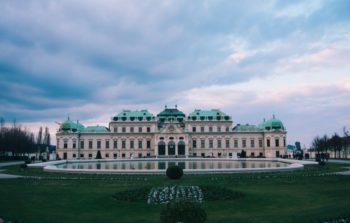 Against this backdrop, the Prince’s private apartments eloquently illustrate his taste and the artistic achievements of his time. Along with your guide, consider the Baroque elements of the Festive room in the Upper Belvedere. After Eugene’s death, the complex continued to play a significant cultural role in Austrian history. Inspired by the idea of enlightened absolutism, the Belvedere became one of the first public museums in the world with the intention to make the Habsburgs’ imperial collection accessible to the general public. 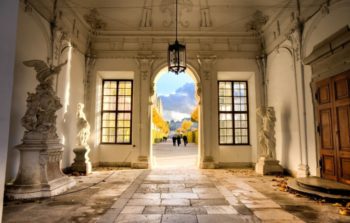 Today, the Belvedere Museum exhibits a world-class compilation of Austrian and international paintings from the Middle Ages to the present day, including items of the Austrian National Gallery masterpieces. Such pieces include Gustav Klimt’s most acclaimed paintings from his golden period: The Kiss, Judith, landscapes from the Attersee series, and other sophisticated portraits of high society ladies. As a counterpoint, the dramatic and contorted style of Klimt’s younger colleague, Egon Schiele (also on display) evokes the unfolding trauma of the First World War in a profoundly autobiographical manner. The museum also boasts works of Jacques-Louis David, Caspar David Friedrich, Auguste Rodin, Claude Monet, Giuseppe Segantini, and Vincent van Gogh. 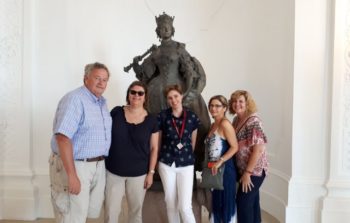 After the one-hour excursion through the grounds and palaces, our Belvedere tour moves you through an introductory 1.5-hour tour to point out the Art Museum’s highlights. Besides Klimt’s and Schiele’s great canvasses representing Fin de siècle Vienna’s avant-gardism and sophisticated art patrons, you’ll encounter David’s well-known Napoleon on The Great St. Bernard Pass (1801), where the artist’s propagandist pathos is combined with his fiery boldness. In a different way, Caspar David Friedrich’s atmospheric Seashore in the Fog combines romantic introspection with metaphysical symbolism in a sensitive, precisely painted maritime landscape. Austrian painting in the era of Biedermeier is represented by Friedrich von Amerling’s emotive rendering of familial affection in Rudolf von Arthaber and his Children (1837) and by Ferdinand Waldmüller’s On Corpus Christi Morning (1857), where the realistic reproduction of sunlight demonstrates the sacred on earth.

We learned alot from our guide, Stephan. He explained the differences between the numerous styles of art and shared the history of the different art pieces. He also spoke of the history of Belvedere Palace and how it was built. We really really enjoyed our tour and found Stephan’s passion for history and art infectious.

We were extremely fortunately to have Ira as our guide. She met us on time, helped us purchase the right tickets, provided a wonderful history of the place, walked us through the gardens, provided information on key pictures and recommended a great place for lunch. Belvedere Palace is beautiful and Ira helped us see that beauty. You will be fortunate, just like us, if you get her as your guide.

We arrived in Vienna with only one full day to enjoy the sights. A tour of the Belvedere was recommended and did not disappoint!! Our tour guide Alan met us at the ticket office as scheduled. We went through the Belvedere receiving highlights of the art and artists as well as the history of the Vienna. Thanks Alan for making this one of our very best tours! We would have never had such a great day and visit to Vienna without this tour. We will return!

Angelika was a great tour guide of a beautiful palace/gallery. Brought art to life through detailed background, and showed the progression of the artists.